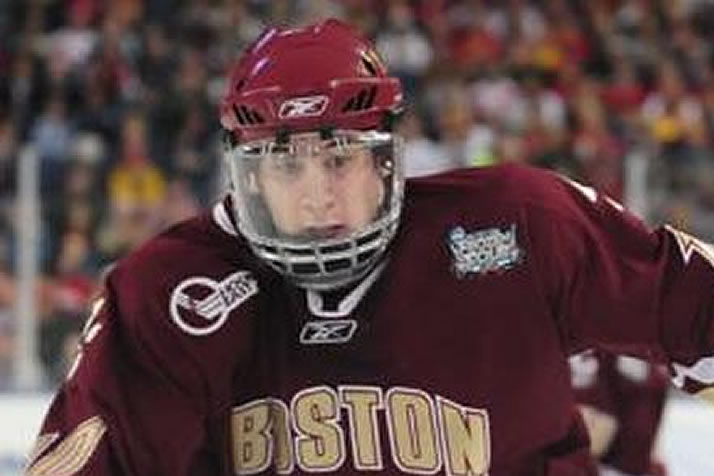 When Jimmy Hayes arrived in Lincoln, Nebraska for the 2007-08 season, he wasn't quite sure what to expect.

"I knew very little about the USHL," Hayes admits, "other than what I'd heard about Omaha, Sioux City, and Sioux Falls."

How, then, did this Dorchester, Massachusetts native end up in Lincoln?

According to Colby Cohen - who tallied 60 points (13g, 47a) in 53 games for the Lincoln Stars the year before Jimmy Hayes broke onto the USHL scene - it took some friendly encouragement.

"I almost begged Jimmy Hayes to go to there," Cohen said. "I was literally on the phone with him every day, telling him, 'You're crazy if you don't go to Lincoln, you have to go to Lincoln."

This week, Hayes gave USHL.com his own side of the story.

"He told me I just had to see it for myself."

After a brief, yet fruitful season with the Stars, Hayes was selected in the second round, 60thoverall, by the Toronto Maple Leafs in this 2008 NHL Entry Draft, and this off-season, his rights were traded to the defending Stanley Cup Champions, the Chicago Blackhawks.

But before Hayes takes the next step in his career, he will learn how to defend another title - the NCAA National Championship.

Off to a 3-0 start, it's safe to say that his BC Eagles - currently ranked #1 in the nation - are showing no signs of letting up.

And neither is Jimmy Hayes. On Monday, October 18th, after two goals and one assist in three games, Hayes was named Hockey East Player of the Week.

So what does it feel like to be Jimmy Hayes - a rising star on the best college team in the country? In the words of Colby Cohen, we will just have to hear it for ourselves.

Back in April, your Eagles were crowned national champions. Can you describe what that was like?

It meant the world to me - and the best was being able to celebrate with all the guys on our team, just seeing how happy we all were. Because there's just so much hard work thrown into it - guys that were at BC for 16 weeks straight during the summer and the rest of the guys working just as hard back home. To work that hard and be able to celebrate after winning a big game, and a big trophy and a nice ring-it was just incredible.

You led all Hockey East scorers with seven points (2g, 5a) in four league postseason victories. How did you take your game to a new level when it mattered most?

I think I just kind of grew as the year went on. At the beginning of the year, it was still a bit of a learning process for me as a sophomore. During the regular season, we played in some really big games - the Denver tournament, the Frozen Fenway game, and the Beanpot. So from the Beanpot on, I really settled into that power forward role and luckily things started to fall my way.

I wasn't sure what team was going to pick me, and I didn't think it would be Toronto, but they ended up picking me up and it was unbelievable. Since then, I've gone to two different camps, and this summer I got traded to Chicago. My younger brother was drafted by Chicago in the first round on Friday night and then on Saturday morning, I got traded to Chicago, so that was pretty cool to go to that pro camp with him.

Is there an NHL player you have tried modeling your game after?

My favorite pro player that I like to try and play like is Ryan Getzlaf (Anaheim Ducks). He's a highly skilled guy who plays that power forward type game. And growing up, my second cousin is Keith Tkachuk, so he plays the American power forward type role and I've always envisioned myself trying to do that as well.

When you think of yourself as a professional hockey player, what do you envision?

I want to be a pro hockey player - I know that's what I want to do, and for me to succeed I'll have to thrive in that power forward role, lay some checks and score some goals.

What was involved in your decision to join the USHL ? besides some friendly advice from Colby Cohen?

It was a big year for me, and I just felt I needed a change. My brother and I both committed to BC pretty young, so I knew I was coming here when I was a sophomore in high school. I could have stayed in prep school and still made it here, but I just felt like I needed to go do something else with hockey, and get bigger and stronger. I didn't know very much about the USHL going in, so when I showed up at Lincoln, I wasn't expecting the crowds and the type of atmosphere they had there. It's unbelievable ? probably one of the best atmospheres to play hockey in.

What was so special about the atmosphere in Lincoln?

I didn't play in many of the Eastern Conference teams' arenas, but I know that the Western Conference had the most unbelievable fans. Attendance-wise, it proves that these people are die-hard fans, and they stay loyal to the team even when they're struggling. It's just an unbelievable place - a great arena that gets really loud and really fun to play in.

You say you didn't know much about the league going in. So what did you find out while you played there?

I just didn't realize how good of a league it was. I mean, a lot of kids from the East Coast don't go out there, and when I came back I told them what an unbelievable league the USHL was. It's a big step for some kids - to move away from home, all the way to the Midwest from the East Coast. But the number of kids in the league going Division I, the atmosphere you play in, and the competition you're playing against ? they don't lie when they say it's the best junior league in the U.S.

Was the transition difficult, moving from Dorchester, MA to Lincoln, NE?

It wasn't as hard as I thought it would be. The city of Lincoln is actually a really happening place. The university is right there, the football team's there - it's a pretty outgoing city and I had a blast. Some of the best memories I have are from my days in Lincoln.

Before you came to BC, what were you looking forward to about playing college hockey?

Just the whole college hockey scene. I mean, major juniors are different ? you play more games but the age limit means that in college you play against older guys. It might take you a little longer to get to where you want to go with pro hockey, but over time you get used to playing with older more experienced players. And you also get the whole strength and conditioning program. So I think that's why you're seeing more and more guys out of college hockey and the USHL going pro now than you used to.

What is life like in the city of Boston?

It's great. I grew up 15 minutes from BC's campus so I lived there my whole life. It's a great city, a great hockey town with some big-time schools - and I believe [the Hockey East] is one of the best leagues in college hockey. Going to different rinks that are so close to each other ? you develop some great rivalries, and all these good buddies around that live just down the street.

What do you do in your spare time, off the ice?

I try to go to as many Bruins and Red Socks games as I can. My dad is actually a ticket broker so he gets us some tickets here and there. But other than that, we hang around school a lot, we have an eight-man suite with eight juniors from the hockey team all in the same room, so it's really fun. We have tons of X-box tournaments and whatnot going on.

There are currently eight USHL players on BC's roster. What does that do for your team?

What's it like to play against other USHL alumni - in the Hockey East and around the country?

It's really cool - when you look at another team's roster and you're like, "Oh that guy played in the USHL," or "I remember playing against that guy," and there're always some stories you had with one another, some old rivalries that you had out there on the ice. So it makes it fun, and it's great to see that the USHL is producing so many high-end players for these big-time schools.

The hockey world is expecting another big year for the defending champions. But what do you expect from the team, exactly?

We pretty much talked about it as a team, and we have this whole deal where we envision opponents in this small picture, day to day, and then we look at the big picture. The first trophy we want to win is the Hockey East, and we also want to win the Beanpot-and eventually, we want what all the other teams set out to win - the National Championship.

Personally, I just want be a better leader this year, and become a go-to guy on and off the ice. My little brother's here now, who I can mentor, and I want to become a mentor for all the younger guys here.