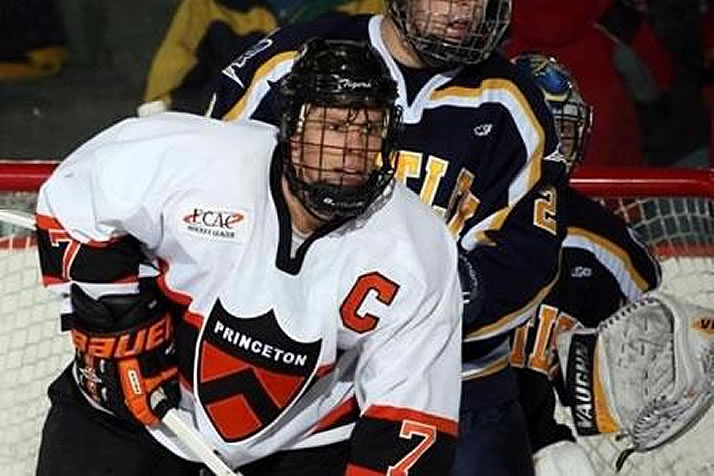 COLUMBUS - Since arriving last December, Peter Laviolette has clamored for accountability, effort, discipline - and, most of all, consistency.

Darroll Powe may just be his model hockey player.

Powe, one of the Flyers' most noticeable players through the first seven games, was rewarded with a game on the first line on Saturday night. Laviolette bumped Powe - usually reserved for the checking line - up to play with Mike Richards and Claude Giroux.

The line clicked. Richards posted his first goal of the season and picked up two assists, pacing the Flyers to a 5-2 victory over Toronto, one of the hottest teams in the Eastern Conference. But Powe was the man behind the scenes.

Powe, 25, is a rarity in today's NHL. And it's not his Ivy League degree in sociology from Princeton that sets him apart.

Powe is undersized (at 5-11) for a grind-line winger. He was undrafted out of college. But he caught the eye of former Flyers coach John Stevens, who helped mold him into the role he fills today.

Instead, Laviolette has found him to be an integral cog among the Flyers' working parts. Powe has carved out a nice living for himself with the Flyers.

"He's one of those players that can play all three positions on all four lines," Laviolette said. "He can play on any line and bring his strengths to that line. He's able to get in on the forecheck and separate pucks from people. He can be a presence in front of the net.

"He's a powerful guy. He's one of those energy guys that seems to play hard every night. But for me, since I've been here, he's been a pretty consistent player."

For the Flyers to take a different path to the postseason - read: not relying on Brian Boucher to stuff the Rangers' Olli Jokinen on the last attempt of a shootout on the final day of the regular season - they will need to be more consistent.

General manager Paul Holmgren - who already had a stacked roster - found a way to keep Powe, an unrestricted free agent this summer, in the mix. Powe never forgets to pack his blue-collar style in his equipment bag.

"I try and follow the same routine every day," Powe said. "There are always days when you're not feeling good, but you need to just go through the same thing and make sure that you're ready at the drop of the puck. I try and give my best effort every night."

Powe, who played a season-high 14:29 on Saturday, has skated more this season because of his job on the penalty kill. Powe saw more ice time Saturday than James van Riemsdyk and Nikolay Zherdev - but he would see even more if he could chip in offensively, too.

"I'd like to contribute a little bit more that way," Powe said. "I've carved myself an identity as a penalty killer and as a role player, but there's some things that I can continue to work on on the offensive side of the puck, things that I want to improve on."

Perhaps because Saturday's game was a premiere "Hockey Night in Canada" matchup, Richards said he could feel a different intensity level in the locker room.

"We were ready for the game," Richards said. "Losing two or three in a row doesn't hurt, either. I think you could feel the energy before the game in our locker room, that everyone just had a sense that everyone was ready. I think we played with a sense of desperation."

For the second game in a row, the Flyers posted 40 or more shots on net. They also had 68 attempts (40 shots, 13 blocked and 15 missed) at Jean-Sebastian Giguere. They threw 89 (42 shots, 28 blocked and 19 missed) at Anaheim's Curtis McElhinney last Thursday.

"When we're getting 80-90 attempts at the net, we know we're playing our style of hockey," Powe said. "There are still things we need to clean up in our game, but overall, we're heading in the right direction."

Powe said he has noticed a different level of intensity for regular-season games than last year.

"There's definitely a little bit of a different feel," Powe said. "We've got a specific goal in mind - and that's to win the Stanley Cup. We're really motivated. Every game this year, we're approaching like a must-win. We snuck in on a shootout last year. We know the importance of every game. Just because it's October or November and not March or April, we still know the importance of every game."

We'll see if that consistency - evident in the two previous games, even if one of them was a loss - can stick when the Flyers begin a stretch of five games in 8 nights tonight against the Blue Jackets.