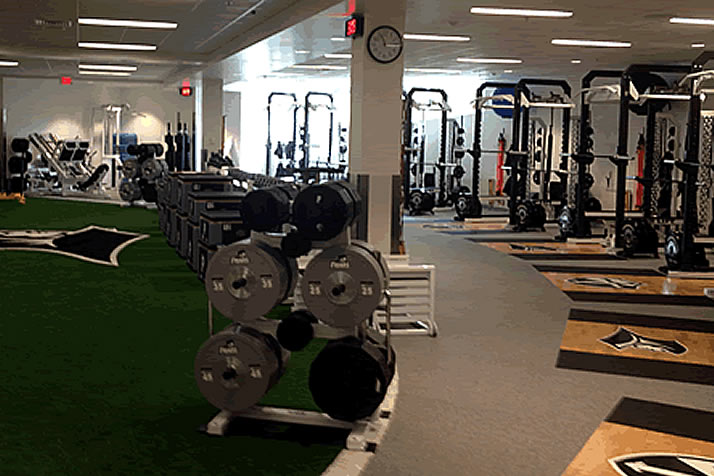 This story originally appeared as part of a four-page special college hockey section in the Nov. 4, 2013, edition of The Hockey News.

When you’re a 16-year-old elite prospect like Boston College defenseman Mike Matheson was, it’s hard to wrap your head around the enormity of the decision you’re about to make.

Most kids at that age are begging their parents for a driver’s permit; Matheson and many other hockey players are deciding whether to go to college or play major junior and nullify your NCAA eligibility.

For Matheson, a 2012 first-round draft choice of the Florida Panthers, the choice wasn’t simply about what was going to happen on the ice. He was just as concerned with what he would be doing in his time off the ice, specifically strength and conditioning training, which played a huge role in his decision to play college hockey and attend BC.

“My dad and I sat at our kitchen table and put schedules side by side,” he said. “We just took a basic college schedule and a basic QMJHL schedule, and looked at how often the games were and in juniors, you’re playing pretty much every two days and there can be a lot of travel at times, so getting in lifts would have been hard. On a typical week at BC I can get in at least three good workouts per week.”

That strength and conditioning base is vital to success at the next level, especially for players like Matheson, who have top-flight NHL potential.

“In the college ranks, guys can actually get stronger during the year. You not only are maintaining, you are building and adding to your base. ”

Goodman not only works with current Blackhawks, but every summer he works with the team’s prospects during its annual development camp.

“You can see the difference between the college and junior guys,” he said. “The schedule in college allows you more time in the weight room, just with the number of games being less, so the biggest thing that I notice is that they’re more well-rounded in the room during the workouts. They’re familiar with the technique and they also have a very good base.”

College athletes not only benefit from the time allowed by the schedule, but also the expertise of full-time strength and conditioning coaches like Goodman, and state-of-the-art facilities designed to promote player development.

The college hockey season is unique in that it’s the highest level of the sport you can play while also allowing your body to make gains in the weight room during the season. Those gains aren’t just for strength, but also injury prevention and can help keep a player’s body on the ice and in the game.

“In the NHL, all we can really do during the season is maintain and try to prevent injuries,” Goodman said. “You’re playing so often that it’s hard to make gains during the year, and I think the schedule in juniors is very similar, so with our guys in the NHL, we need to see those gains made over the summer in the offseason and it’s the same in the junior ranks.

“In the college ranks, guys can actually get stronger during the year. You not only are maintaining, you are building and adding to your base. ”

The entire strength and conditioning model has evolved a great deal over the last decade. Injury prevention and player-specific workouts are commonplace not only in the NHL, but in NCAA weight rooms across the country. At Merrimack College, strength and conditioning coach Mike Kamal has the programs mission statement written on the wall of his facility, and the first goal of the program, in bold letters, reads, “reduce the risk of injury.”

“I know there have definitely been times where my training has helped me prevent an injury,” Matheson said. “Let’s say you get a little banged up and feel something in your hip, well I can go into the weight room and because we play less games, I have the time to get with our coaches and do specific workouts to strengthen the area around a minor injury so it doesn’t get injured further and I don’t miss any games. College guys you see going into the NHL, their bodies are just more mature; we’re still 22 or 23 but your body, from the lifting you can do, is more mature.”

On the ice, Matheson also prescribes to the theory that practice makes perfect.

“Playing less not only helps in the weight room but on the ice our practices are pretty intense,” he said. “Part of my conditioning comes on the ice where once a week we have a battle day and we do pretty hard at each other in practice.”

Proven Results in the NHL

Ask a few current NHLers and you can’t argue with results.

“I was a small and skinny guy coming into college,” said Dallas Stars center Shawn Horcoff, who played four years at Michigan State. “When I left I was 195, so 30 pounds heavier and ready for the NHL.”

Horcoff played 49 games in the NHL his first professional season.

“In college you’re in the gym with great strength coaches every day,” he said. “They’re teaching you about diet and nutrition; for me, I stepped into the NHL out of college and I felt like I was ahead of the game, I was prepared better than other kids my age.”

That preparedness is often the slight edge that helps a player earn that final roster spot.

Mike McMahon is a senior writer for College Hockey News.