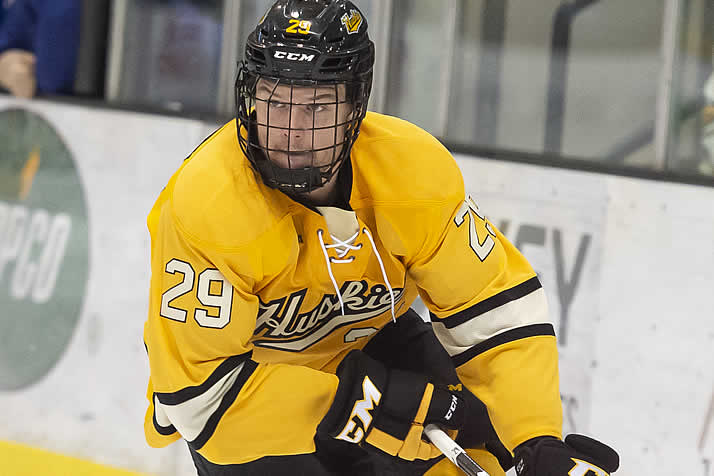 Alec Broetzman is one of three players atop Michigan Tech’s scoring chart.

Michigan Tech, coming off a sweep of Lake Superior State, faces its other Upper Peninsula rival this weekend in a home-and-home with Northern Michigan. The Huskies are benefitting from a balanced offense led by three players with seven points each. Of the 18 players nationally with hat tricks, only two are teammates: MTU sophomores Alec Broetzman (Hudson, Wisc./Madison-USHL) and Tommy Parrottino (Rochester Hills, Mich./Youngstown-USHL). The Huskies are 5-1-0 when scoring at least two goals in a game.

Tufto nears 100 – Junior Odeen Tufto (Chaska, Minn./Sioux City-USHL) leads Quinnipiac into its series at Cornell and Colgate with 13 points through 11 games. Tufto enters the weekend with 96 career points, on the verge of becoming the first active junior to hit the century mark. His 1.10 career points per game lead all active juniors and seniors.

Halloran rebounds from surgery – Colorado College senior Nick Halloran (Draper, Utah/Trail-BCHL) scored goals in each game of the Tigers' sweep at St. Cloud State, further proof that the dynamic winger is back after hip surgery cut short his junior season. An All-American as a sophomore, Halloran has since had surgery on both hips and was limited to 20 games a year ago. He's missed just one game this season and is averaging more than a point per game in the seven he's played, entering this weekend's series at Minnesota Duluth.

Air Force, Tomlak flying – Air Force has won three in a row after an 0-7-0 start heading into a visit to Atlantic Hockey-leading Robert Morris. The biggest difference: the offense has come alive, led by senior Brady Tomlak (Oakland, Mich./Springfield-NAHL). Tomlak, whose father, Mike, played for the Hartford Whalers, took part in flight training this past summer and was able to fly solo by the end of the course. Air Force Record GF GA First 7 Games 0-7-0 8 28 Last 3 Games 3-0-0 11 7

Chaffee elevates game – While Cale Makar lights up the NHL, his alma mater – Massachusetts – has maintained a No. 7 national ranking entering a home-and-home with Merrimack. Leading the way is junior Mitchell Chaffee (Rockford, Mich./Bloomington-USHL), whose nine goals share the national lead. Chaffee is one of two returning first-team All-Americans in the nation (UMD's Hunter Shepard is the other), but he seems to have elevated his game even further as a junior. He carries a seven-game point streak into the weekend. | Friday's game is on NESN