Notes: York Called to Hall
Jerry York will be inducted in the Hockey Hall of Fame on Monday. 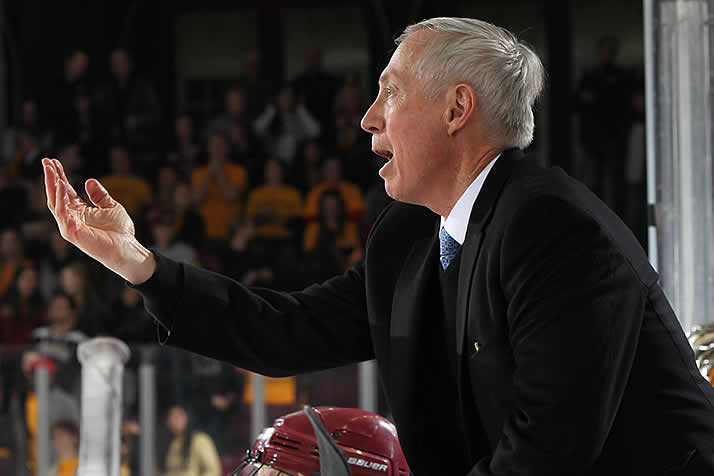 Jerry York leads Boston College to Vermont for a two-game series this weekend.

Jerry York makes college hockey history Monday, when the sport's winningest coach is inducted in the Hockey Hall of Fame. First, York takes his Boston College team to Burlington, Vt., where he will look to add to his 1,070 career wins in a two-game series with Vermont. | NHL.com: York rewarded for decades of success with Hockey Hall of Fame nod

Cornell's big gun – The nation's leader in points per game is Cornell's Morgan Barron (Halifax, N.S./St. Andrew's College/NYR), who has five goals and five assists through just four games – all wins for the Big Red. The returning first-team All-ECAC Hockey performer has a younger brother, Justin, who is a first-round prospect for the 2020 NHL Draft. Morgan is one of a growing number of Nova Scotians having an impact at the Division I level.

Brady bounces back – Bemidji State exploded for 12 goals last weekend, nearly matching its total from its first six games, led by three tallies from Adam Brady (Delhi, Ont./Lincoln-USHL). The senior captain's five goals and eight points on the season both lead the Beavers. Brady is only four years removed from a devastating car accident that nearly ended his hockey career. After 22 months of recovery, he returned to score eight goals in each of his first two seasons with Bemidji State. He is more than halfway to that total this season entering this weekend's series at Ferris State.

North Dakota's fast start – North Dakota has broken into the nation's top 10 entering a series at No. 2 Denver thanks to its best start in five years (7-1-1). Junior forward Jordan Kawaguchi (Abbotsford, B.C./Chilliwack-BCHL) has fueled the Fighting Hawks offensively. His five-game point streak included six points last weekend – the second and third three-point games of his season – while his +12 rating trails only linemate Collin Adams (Brighton, Mich./Muskegon-USHL/NYI) nationally. | Friday's game is on Altitude

Lethemon on a roll for MSU – Michigan State faces archrival Michigan after earning a split at Penn State, including a shutout Friday night from senior John Lethemon (Northville, Mich./Chicago-USHL). Lethemon has raced to the best start of his career, posting a .926 save percentage through six games – his career high for a season was .905 last year. He posted a career-high 48 saves to earn the 2-0 shutout of the Nittany Lions last Friday. | Thursday's game is on BTN

Army's backstop – Army West Point heads to Holy Cross at 4-3-0 and only surrendered one goal in three of those victories. Backstopping that effort has been junior goaltender Trevin Kozlowski (Valencia, Calif./Salmon Arm-BCHL), who has claimed the No. 1 role after three goalies split duties for the Black Knights last season. The 6-foot-4 Californian has won each game in which the Black Knights have scored more than one goal this season.