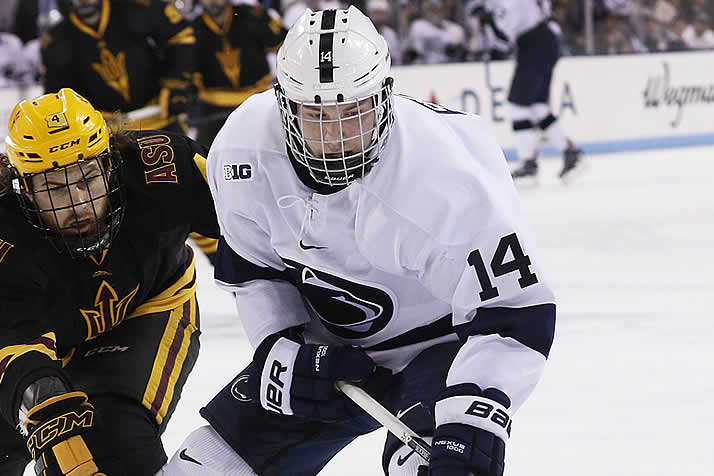 Conference races are in the spotlight with two or three weekends remaining in the regular season, and this weekend the Big Ten features the most compelling matchup. Minnesota travels to Penn State with both teams tied atop the standings at 36 points, though the Golden Gophers have two games in hand. In all, three of the six conferences across the country have ties for first place. | Both Minnesota-Penn State games are on BTN

Curry leads BU – Senior captain Patrick Curry (Schaumburg, Ill./Bloomington-USHL), Boston University's leader in goals (16), shots (101) and plus/minus (+13, tied), has his team in the thick of the Hockey East race with five games remaining. Curry is flourishing in his best season yet, while leading a young Terrier team that is enjoying an 8-3-3 stretch after a 4-6-5 start. BU is one point out of first place in the conference entering a home-and-home with UConn. | BU Today: A study in diligence and drive | Saturday's game is on NESN

Outdoor hat trick – Grant Cruikshank (Delafield, Wisc./Penticton-BCHL) posted his first career hat trick in a memorable setting: Monday's Faceoff at Falcon Stadium, where his Colorado College team beat Air Force, 4-2. Cruikshank – the son of Olympic speed skaters David Cruikshank and Bonnie Blair – is co-captain of the Tigers as just a sophomore. He ranks second on the team in goals (11) and tied for fourth in points (15).

Coleman emerges for RMU – Amid injuries and illnesses, Robert Morris has found a bit of a surprise offensive contributor in senior forward Jacob Coleman (Moon Twp., Pa./Muskegon-USHL). The hometown hero is second on the team with 18 points, just one shy of his career total from his first three seasons combined. Coleman had goals in both games of last weekend's split at Holy Cross to keep the Colonials in position to earn a first-round bye in the Atlantic Hockey tournament.

Rookie leads Harvard – Harvard has the nation's No. 5 offense (3.68 goals per game), and it's fueled by four freshmen or sophomores atop the team's scoring chart. Leading the way is rookie Nick Abruzzese (Slate Hill, N.Y./Chicago-USHL/TOR), whose 35 points also lead all NCAA freshmen in scoring. Abruzzese's scoring touch was evident in junior hockey, as he led the USHL with 80 points last season.

BGSU's offensive D – Bowling Green is unbeaten in four straight with four games to play in the regular season, led in scoring by senior defenseman Alec Rauhauser (Bismarck, N.D./Des Moines-USHL). One of the nation's top offensive defensemen, Rauhauser is also an undrafted NHL free agent who will be in contention to earn an NHL contract once his college career ends. He has put up at least 22 points in each of his four years as a Falcon, including a career-high 10 goals this season.

Hockey East named Steve Metcalf the conference's fifth commissioner … 11 games this weekend are on national/regional sports networks … Providence's Jack Dugan (Rochester, N.Y./Chicago-USHL/VGK) is one point shy of 50 on the season, with a five-point lead in the national scoring race.