Notes: Favored Status
A look at each top seed as all six conference tournaments are underway. 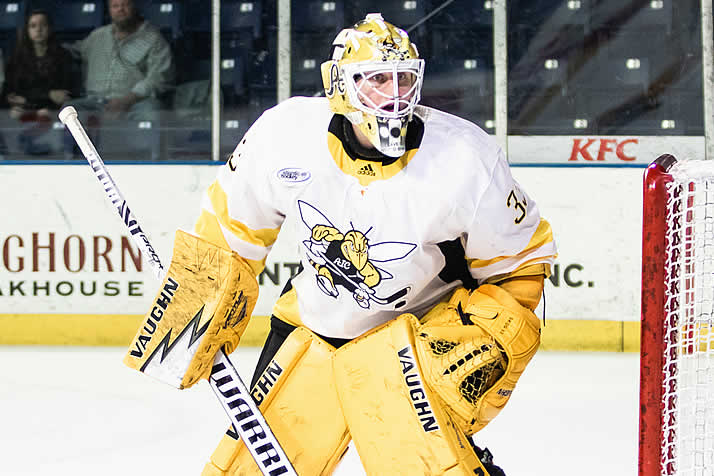 All six Division I men's conferences are in the postseason this weekend, either quarterfinals (Atlantic Hockey, ECAC Hockey, Hockey East, NCHC) or semifinals (Big Ten, WCHA). Favorites won 11 of 14 series last weekend; this week's notes look at the top seed in each conference.

Last year's NCAA Cinderella story, American International, won its second straight Atlantic Hockey title thanks to a 12-1-0 record down the stretch. The Yellow Jackets' top 15 scorers are all back from last season's team, but one new face has contributed to their second-half success. Junior goaltender Stefano Durante (Brampton, Ont./Cobourg-OJHL) – the backup last season – started 10 games of AIC's 11-game winning streak. He and incumbent starter Zacharias Skog (Goteburg, Sweden/Omaha-USHL) have combined for a .918 team save percentage, significantly higher than last season's .889.

Penn State's balancing act – Penn State earned the top seed and accompanying bye in the Big Ten, thanks in large part to a balanced offense that features four 30-point scorers and six players in double-digits in goals. The Nittany Lions are one of seven teams nationwide with four 30-point scorers, including junior Cole Hults (Stoughton, Wis./Madison-USHL/LAK), who ranks 10th among all defensemen with 30 points.

Galajda's bounce-back – A .921 save percentage would rank in the nation's top 20, but it represented a bit of a dip last year for Cornell's Matthew Galajda (Aurora, Ont./Victoria-BCHL) after his All-America rookie season. He's back to that form this year as a junior, posting a .931 mark while starting every game for the 23-2-4 Big Red. Galajda's 60 career wins trail only three seniors among active goaltenders.

BC's young guns – Boston College has the nation's largest senior class (11), but an all-freshman line has grabbed headlines for the Eagles, particularly in the second half. Alex Newhook (St. John's, Newf./Victoria-BCHL/COL) was February's National Player and Rookie of the Month while skating alongside classmates Matt Boldy (Millis, Mass./U.S. NTDP/MIN) and Mike Hardman (Hanover, Mass./West Kelowna-BCHL). They lead BC into this weekend's Hockey East quarterfinal series against Providence. | NHL.com: High praise for Avalanche prospect

UND's elite D – Top NCHC seed North Dakota boasts one of the more active defense corps in the nation. Leading the way is junior Matt Kiersted (Elk River, Minn./Chicago-USHL), a top undrafted NHL free agent who ranks second on the Fighting Hawks with 29 points. He is one of four UND blueliners to sit in double-digits in points entering the postseason, which opens this weekend against Colorado College.

Bowling Green, Michigan Tech and Princeton produced playoff series upsets last weekend … Cornell and Rensselaer have announced plans to host playoff games that are closed to the public due to the spread of COVID-19.