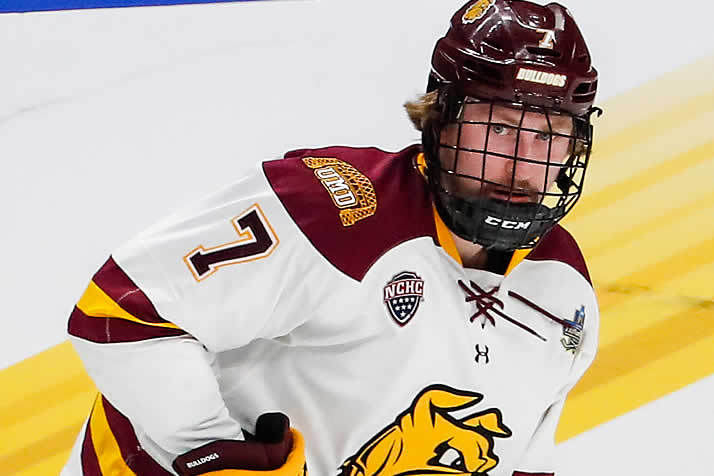 Scott Perunovich earned All-America honors in each of his three collegiate seasons (Photo by Matt Dewkett).

After winning national championships in each of his last two seasons, Minnesota Duluth’s Scott Perunovich took home the nation’s highest individual honor when he was named the 2020 Hobey Baker Award winner Saturday night.

College hockey’s top honors were revealed Saturday night on SportsCenter by ESPN’s John Buccigross, who typically would have been calling the national championship game in Detroit had the season not been cut short. Other award winners:

Perunovich, a junior defenseman from Hibbing, Minn., finished the season with a career-high 40 points in 34 games, with a +18 rating. He stood tied for 10th nationally in scoring and second among defensemen. He has agreed to terms with the NHL’s St. Louis Blues.

Perunovich becomes the second defenseman in a row and third in four years to win the Hobey, following Cale Makar (2019) and Will Butcher (2017). He is Minnesota Duluth’s sixth Hobey Baker Award winner.

Maine’s Jeremy Swayman, the first-team East All-America goaltender, claims the Mike Richter Award as the nation’s top netminder for 2019-20. Swayman faced more shots than any goaltender in the nation and produced the nation’s second-best save percentage (.939).