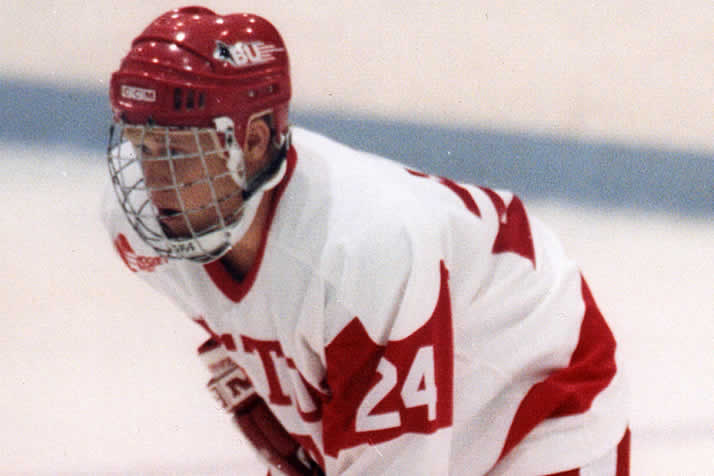 A college hockey legend despite a career that lasted just 11 seconds, Travis Roy died Wednesday at the age of 45.

The Boston University alumnus, who was paralyzed on his first shift 25 years ago this month, became an inspiration to countless people through his work as a motivational speaker and with the Travis Roy Foundation.

“It is with heavy hearts that we mourn the passing of Travis Roy,” BU Athletics said in a statement. “His story is the epitome of inspiration and courage, and he was a role model and a hero to so many people. Travis’ work and dedication towards helping fellow spinal cord-injury survivors is nothing short of amazing. His legacy will last forever, not just within the Boston University community, but with the countless lives he has impacted across the country. Our sincere thoughts are with his wonderful family as well as his vast support group of friends and colleagues.”

Roy’s story was told brilliantly by ESPN’s E:60 and in his autobiography, Eleven Seconds. Upon his passing, people in the college hockey community and well beyond shared how much he meant to them.

“Anyone who heard him speak,” wrote the Boston Globe’s Kevin Cullen, “will know what I mean when I say he was awe-inspiring in the most understated way. Just by telling his story, Travis provided one of life’s greatest gifts: perspective.”

“He was one of the most inspirational people I have ever met,” tweeted NESN’s Tom Caron, who first met Roy while broadcasting a high school hockey game in Maine. “He taught us all that no obstacle, no adversity, was too much. That there was always hope for a better life. May he Rest in Peace.”

“Countless conversations, emails, texts with my friend,” tweeted ESPN’s John Buccigross. “He just loved to talk hockey. Frozen in that chair always tightened my chest with sadness. But, he became a pass first human improving the life of many with his grit and relentlessness. Travis Roy was 45. Skate again, my man.”

Among the memories was Fluto Shinzawa’s of The Athletic, who covered Roy as a fellow freshman working for the BU student newspaper.

Shinzawa recalled an early conversation with Roy, before his accident, about the opportunity to play for BU: “It’s an absolute dream.”

Roy’s life, then and well after his accident, became a demonstration in celebrating gratitude – for achieving dreams and for living a fulfilling life every day.

His memory, in the college hockey community and well beyond, will live on with gratitude.