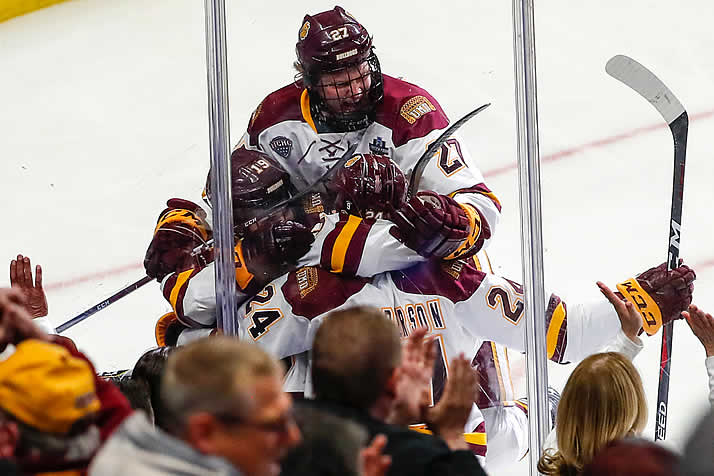 Minnesota Duluth has claimed each of the last two national championships (Photo by Matt Dewkett).

After a start delayed by the coronavirus pandemic, the NCAA Division I men’s hockey season opens Friday, Nov. 13, as the race to the 2021 Frozen Four begins. The first weekend features seven games, with several more teams joining the fray in the following week.

What is already a unique season is sure to feature even more intrigue as the puck drops. Regular-season games have always been incredibly meaningful in college hockey, but may take on even more importance in a shortened schedule with limited non-conference play. Competition for conference titles and national tournament berths will be fierce.

College hockey enters 2020-21 enjoying an era of tremendous parity and success in developing players for the professional ranks. Below are some of the top storylines and elite performers to watch as the season gets underway.

Season like no other – As with so many aspects of like, the pandemic has had a major impact on college hockey. After last season was cut short and this season delayed, there will have been 250 days between Division I games when the puck drops Friday.

The season to come features a mix of conference formats, even with a “pod” for the NCHC in Omaha. Limited non-conference games will make conference races more important than ever, while altering the NCAA Tournament selection criteria that typically relies on a mathematical formula.

Seeking three – The last two NCAA Tournaments ended with Minnesota Duluth hoisting the national championship trophy. The Bulldogs lost some key pieces, including Hobey Baker Award winner Scott Perunovich and goaltender Hunter Shepard. Lots of talent returns, however, and Noah Cates and Cole Koepke make UMD the only team in the country to bring back two All-Americans. They lead a returning group that scored 90 goals last season – only three teams bring back more. The Bulldogs will seek to become just the second school to win three straight crowns (Michigan, 1951-53).

Anybody’s game – While UMD has come out on top in the last two tournaments, college hockey has been in a stretch of tremendous parity recently. More than half of all Division I teams have made the 16-team NCAA tournament in the last five tournaments (33), with 13 schools making at least one Frozen Four appearance in that time. Eight of the top 15 teams in both preseason polls are pursuing their first NCAA championship.

Big names back – The sudden end to the 2019-20 season gave many teams and players a sense of unfinished business, one reason that many stars elected to return to school rather than turn professional. They range from first-round picks like Alex Newhook at Boston College (the 2019-20 rookie of the year) to undrafted free agents like Jordan Kawaguchi at North Dakota (the nation’s top returning scorer).

Did you know? This is the first time in more than 20 years that no players from either Michigan or Minnesota left early to sign NHL contracts.

Who takes home the Hobey? – Three of the 10 finalists for the 2020 Hobey Baker Award return in 2020-21, one year after we had no returnees up for the award. That trio – Boston University defenseman David Farrance, North Dakota forward Jordan Kawaguchi and Minnesota State goaltender Dryden McKay – represent all three position groups on the ice and start the discussion of 2021 candidates.

New faces – Only two schools have hired new head coaches from outside their programs in 2020 – Interstate-89 “neighbors” Dartmouth and Vermont. Both tabbed NHL assistant coaches to lead them forward, with Dartmouth hiring Reid Cashman from the Washington Capitals and Vermont adding Todd Woodcroft from the Winnipeg Jets.

That is not counting the new hire at Long Island, which is a new program entirely. The Sharks announced plans to join Division I in April and Brett Riley – at 29 the youngest head coach in Division I – has assembled a roster and a schedule since then. LIU has a scheduling agreement with Atlantic Hockey and will play 24 of 26 scheduled games against teams from that conference.

Young guns – A talented freshman class comes to campus in 2020, led by two first-round NHL Draft picks (North Dakota’s Jake Sanderson and Michigan’s Brendan Brisson) and three candidates to be top-10 picks in 2021 – all teammates of Brisson at Michigan. In fact, the No. 1 overall selection in next year’s draft could come down to a choice among Wolverines Owen Power, Kent Johnson and Matty Beniers.

Smart guys – The talent U.S. college hockey players display on the rink is matched by their performance in the classroom. Hockey is among the very best NCAA Division I men’s sports in the NCAA’s two biggest academic metrics – the Graduation Success Rate (92%) and Academic Progress Rate.

A number of NHLers have worked to complete their degrees after leaving campus as well. Recently Chris Kreider (Boston College), Torey Krug (Michigan State) and Colton Parayko (Alaska) are among those to have joined the ranks of graduates.