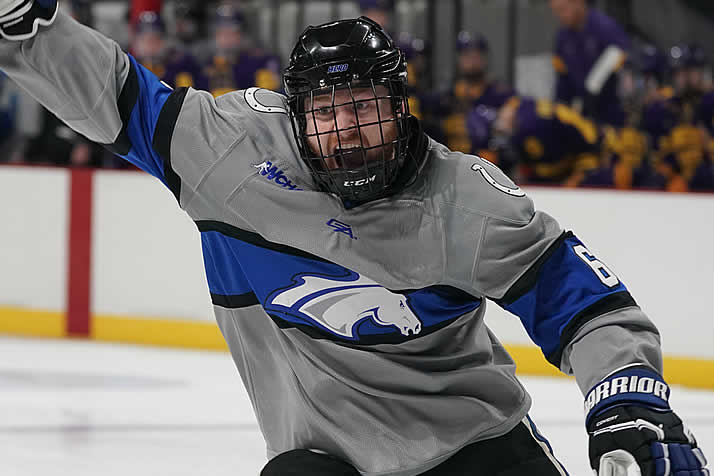 Alabama-Huntsville announced a renewed commitment to its hockey program Wednesday, one fueled by the generous donations of former Chargers.

Former teammates Taso Sofikitis and Sheldon Wolitski spearheaded the alumni effort. The school plans to pursue conference affiliation and the future construction of an on-campus multi-purpose facility that would be home to the team.

“The UAH hockey program has a long and cherished history,” UAH President Darren Dawson said. “We are truly grateful for the vital support from our alumni and community as we work together to ensure that the legacy of UAH hockey continues.”

This renewed commitment charts a path forward for college hockey’s only program in the Southeast. The program was initially saved in May after facing the potential of being dropped by the school due to budget constraints.

“This is an exciting time for UAH hockey,” UAH Athletic Director Cade Smith said. “The UAH administration and our alumni have come together to make a long-term multi-million dollar, multi-year financial commitment so UAH hockey not only survives but becomes a major Division I leader that competes for conference titles and national championships.

“The UAH administration and our alumni are committed to this goal, and it is our hope that the collegiate hockey community will give UAH the opportunity to show what a valued member we will be. Having made the commitment to our hockey program, we know we need to have a conference to call home.”

College Hockey Inc. Executive Director Mike Snee has met with Sofikitis and Wolitski multiple times as they finalized their financial commitment to the school.

“Taso and Sheldon’s enthusiasm for the university and the community is contagious,” Snee said. “They want Charger hockey to not just survive, but thrive. Their generosity and vision create tremendous potential in Huntsville, for the program and for the continued growth of youth hockey in northern Alabama.”

Sofikitis and Wolitski are part of an advisory committee that has been formed to work with the school. The committee has a strong NHL influence including NHL executives Sean Henry (Nashville Predators) and Bill Wickett (Tampa Bay Lightning), as well as former Charger and current NHLer Cam Talbot.

“Vibrant college hockey programs are critical to the overall success of our sport,” said Kevin Westgarth, NHL Vice President, Business Development. “The NHL fully supports any way to grow the game, and the Alabama Huntsville program has helped make that happen in their community. We look forward to seeing the results of this renewed investment.”

Sofikitis and Wolitski were seniors on Alabama Huntsville’s first of two Division II national championship teams, in 1995-96. After a runner-up finish in 1997 the Chargers won again in ’98.

Former Charger Lance West, who was a teammate of Sofikitis and Wolitski, is entering his first season as the program’s head coach in 2020-21. UAH opens the season next Friday, Nov. 20, at Robert Morris.