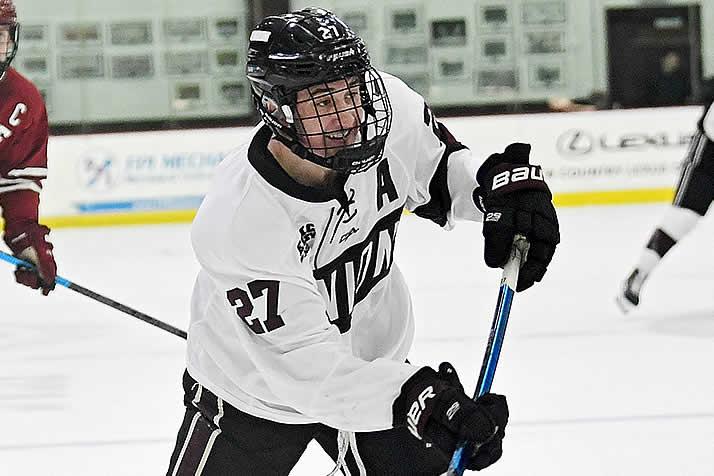 The award is open to NCAA men’s and women’s players from any division, and the finalists represent men and women in Division I and III. The 26th recipient of the Hockey Humanitarian Award will be honored in a ceremony on Friday, April 9, at the NCAA Frozen Four in Pittsburgh, Pa.

Jacob Adkins and Andrew Walker, UMass Boston – The two sophomore forwards found a positive in the midst of the COVID-19 pandemic, teaming up to become the “Men in Blades.” The duo rollerbladed nearly 900 miles from Boston to Mason, Mich., this summer to raise money for the American Cancer Society (ACS). Over the course of their journey, the pair raised more than $30,000 for the ACS and raised awareness of the many charities that need continued donations in the midst of the pandemic.

Josh Kosack, Union – Two years ago Kosack created “Kozi’s Kids,” an initiative that gives local Schenectady children a chance to experience a college hockey game – many for the first time. The program utilizes unused game tickets and concession vouchers from Union players. Kosack arranges for transportation, gives children a tour of the locker room before the game, and answers questions about life as a student-athlete. The pandemic forced changes to the program, with games not being played at Union, but Kosack still singlehandedly raised more than $5,000 to purchase holiday presents for local children. He also delivered more than 100 coats to a Schenectady charity as part of a drive he initiated on campus.

Delaney Wolf, Saint Mary’s – Wolf, a two-time finalist for the award, is also a two-time captain at Saint Mary’s. While balancing the rigors of carrying a 4.0 GPA as a double-major in biochemistry and Spanish and playing college hockey – not to mention playing the French horn in the university band – Wolf finds time to give back. She tutors fellow Saint Mary’s student-athletes, hosts team meals, mentors youth hockey players in the Winona association and spends countless hours participating in volunteer work both in her hometown of Bismarck, N.D., and in Winona, Minn.

The Hockey Humanitarian Award Foundation will make a donation to the charity most important to each of the three finalists. These donations are made possible with the generous support of the award’s partners and donors.