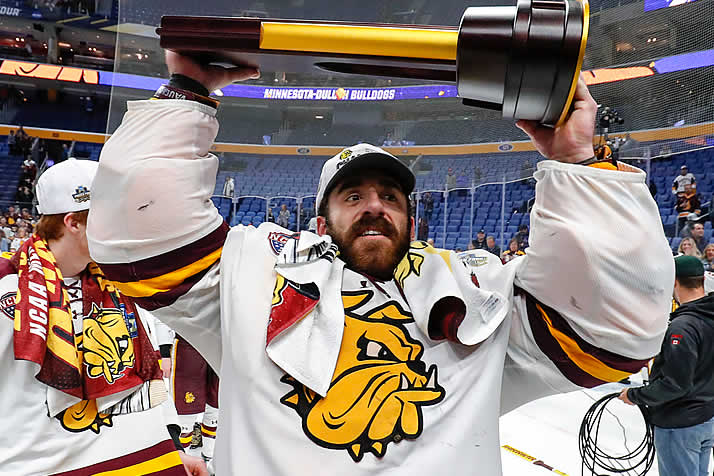 Back in action – The NCAA Tournament returns in 2021 after the 2020 version was canceled due to COVID-19. While the event is a sign of some normalcy in this season, the pandemic has impacted the 2020-21 campaign in countless ways – from the number of teams competing (51), to the number of games they’ve played (25.5 on average among tournament teams) and even the makeup of the field (St. Lawrence had to withdraw due to a positive COVID-19 test).

The 16-team tournament will feature the usual format: four regional sites of four teams each, with the winners advancing to the Frozen Four in Pittsburgh April 8 and 10.

New faces – Despite those usual suspects, fully half of the field is in search of its first championship. Nine of the 16 teams were not in the tournament in 2019.

New faces II – With no tournament last year and a number of teams returning to the tournament after extended absences, relatively few players enter with NCAA Tournament experience. Only 17% of players in the field – including just three goaltenders – have seen action in an NCAA Tournament game.

View the future – More than 106 NHL draft picks are in the tournament (106), including all 12 first-round picks who played college hockey this season. Thirty NHL teams have at least one draft prospect playing (Washington is the lone exception), while 15 of 16 teams in the tournament have at least one draft pick on their roster (Bemidji State is the lone exception).

Twenty-four players in the tournament are eligible for the 2021 NHL Draft, including a trio at Michigan – Matty Beniers (Hingham, Mass./U.S. NTDP), Kent Johnson (Port Moody, B.C./Trail-BCHL) and Owen Power (Mississauga, Ont./Chicago-USHL) – who are all potential top-five picks.

Minnesota, nice – All 5 schools from Minnesota are in the NCAA Tournament for the first time ever. The State of Hockey has also produced 116 players in the tournament, or 26% of all players in the field – more than the next five closest states combined (115).

American International produced the No. 16 win last tournament and returns in the same position this year for its second all-time appearance. While the Yellow Jackets entered the 2019 tourney with the field’s worst record (22-16-1), this year they enter with the best (15-3-0) and the longest active winning streak (seven games).

On the points – Five of the nation’s top six scorers (and 14 of the top 18) are in the tournament, led by Wisconsin sophomore Cole Caufield (Stevens Point, Wis./U.S. NTDP/MTL). Caufield’s 28 goals not only lead the nation, but only one pair of teammates in the field has more goals combined – Minnesota’s Sampo Ranta (Naantali, Finland/Sioux City-USHL/COL) and Sammy Walker (Edina, Minn./Edina HS/TBL), who have 31 goals between them. No active junior has as many career goals as Caufield does in two seasons (47).

Hobey hopefuls – For only the second time in the award’s 41-year history, all 10 Hobey Baker Award finalists are in the NCAA Tournament (also 1989).

Golden boys – Thirteen members of the 2021 U.S. National Junior Team that won gold at the IIHF World Junior Championship are pursuing a national championship as well. Seven players have won both in the same year.

Bridgeport Regional (Friday-Saturday)
The Wisconsin-Bemidji State game (2 p.m. ET Friday) is the tournament opener … Wisconsin’s 31.5% power play leads the nation and is the third-best in the last 10 seasons, while Bemidji State’s 93.3% penalty kill is the second-best in NCAA history … Two of the three WCHA teams in the field are in Bridgeport … Massachusetts made both of its previous NCAA appearances (2007, ’19) in the years since Lake Superior State’s most recent one (1996).

Fargo Regional (Friday-Saturday)
The only two teams in the field who won both their conference regular-season and tournament titles – American International and North Dakota – meet in the first round … Michigan (9), North Dakota (8) and Minnesota Duluth (3) have 20 NCAA titles between them, more than twice as many as any other regional … AIC’s three losses match the fewest by a team entering the tournament since the field expanded to 16 teams in 2003 (also Quinnipiac, 2016) … AIC freshman Aaron Grounds (Jamestown, N.D.) will be playing in his home state … Minnesota Duluth-Michigan is a rematch of the 2011 NCAA championship game.

Albany Regional (Saturday-Sunday)
The 39 NHL Draft picks in Albany are the most of any regional … The first game features the two most experienced coaches in the tournament, as Jerry York and Jeff Jackson have a combined 41 appearances and seven titles … Notre Dame leads all tournament teams with 12 players who have NCAA Tournament experience … Boston College-Notre Dame is a meeting of former Hockey East rivals and a rematch of the 2008 NCAA championship game … Dylan St. Cyr is the only starting goaltender in the field who wears No. 1.