How to Watch the NCAAs
ESPN, TSN to provide wall-to-wall coverage of the NCAA Tournament. 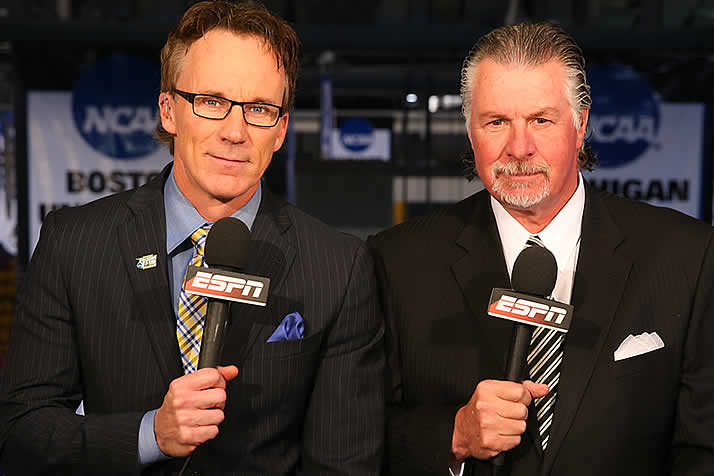 John Buccigross and Barry Melrose will call the Bridgeport Regional and the Frozen Four.

Fans can find every game of the 2021 NCAA Tournament on the ESPN and TSN family of networks, from this weekend’s regionals through the NCAA Frozen Four.

The Frozen Four, April 8 and 10 in Pittsburgh, will be broadcast by John Buccigross, Barry Melrose and Colby Cohen. That group will call the Bridgeport Regional this weekend. The other regional broadcast teams are:

In Canada, TSN will televise select regional games, with the national championship game set for the main network. Every game will be available to TSN and TSN Direct subscribers at TSN.ca and the TSN App.

In addition, RDS will broadcast at least one game in French to Quebec. The network is set to carry the tournament’s first game on Friday, featuring Wisconsin and Montreal Canadiens draft pick Cole Caufield against Bemidji State.

This marks the 16th consecutive tournament that ESPN will carry in its entirety, and the 41st year that the network has televised the national championship game.