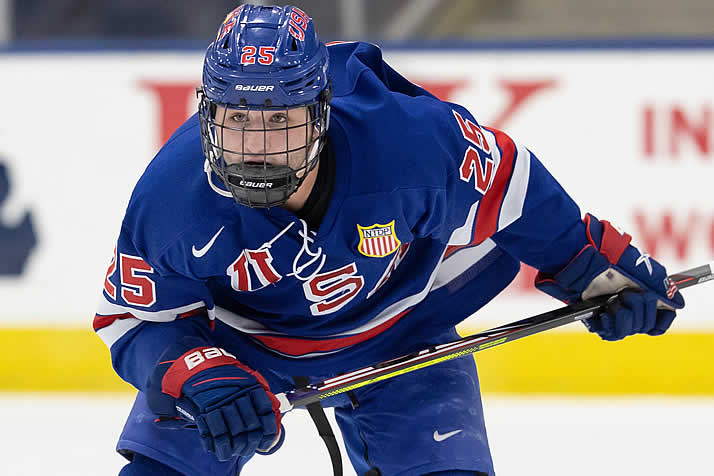 Dylan Duke is committed to Michigan, one of 12 schools with recruits on the U.S. roster (Photo by Rena Laverty / USA Hockey’s NTDP).

The 10-nation tournament will be held April 26-May 6 in Frisco and Plano, Texas. Twenty-four of the 25 players on the roster are members of USA Hockey’s National Team Development Program.

Notre Dame leads all schools with six recruits on the roster, while Boston College, Boston University, Denver and Northeastern each have a pair.

Canada will also feature a pair of NCAA recruits on its roster: Corson Ceulemans (Wisconsin) and Guillaume Richard (Maine).

The U.S. will be led by former Yale assistant coach and current NTDP coach Dan Muse. Yale’s Keith Allain will be among his assistants, along with Mike Leone, Greg Mauldin, Nick Fohr and David Lassonde.

The U.S. is in search of its 11th gold medal in tournament history after most recently claiming gold in 2017 in Poprad, Slovakia. Team USA has medaled in a record 16 consecutive tournaments, including six golds in the last 10 tournaments.