Notebook: Miami's Double Vision
Miami hasn't missed a beat in goal thanks to a pair of freshmen, plus more. 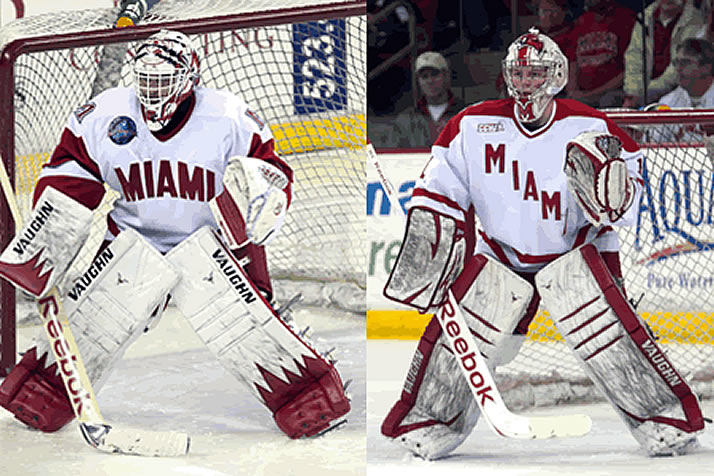 Note of the Week

Young netminders lead Miami – The best team save percentage in college hockey belongs to Miami (.940), which has relied exclusively on two freshmen in goal. Jay Williams and Ryan McKay have filled the skates of graduated tandem Cody Reichard and Connor Knapp and led the RedHawks to a No. 6 national ranking. The rookies have certainly given Miami a chance to win every night – only once has head coach Enrico Blasi’s team lost when scoring at least two goals.

Experience paying off for Laganiere – Yale senior Antoine Laganiere scored goals in each game last weekend, giving him 12 for the season and putting him on pace to surpass the 19 he scored last year. The 6-4, 215-pound Quebec native has blossomed after scoring 12 goals in his first two seasons combined. After attending two NHL development camps last summer the undrafted free agent has attracted even more NHL attention as the lanky right wing has led Yale to a share of second place in ECAC Hockey.
Friday's game is on NBC Sports Network

Gladiuk's immediate impact – Bentley’s offensive output trails only No. 1 Minnesota nationally (3.71 goals per game), and junior Brett Gensler – the reigning Walter Brown Award winner as the top U.S.-born player in New England – is the team’s top scorer. A big reason the Falcons are scoring nearly a goal more than last year (when they averaged 2.85 goals per game) is the arrival of freshman Andrew Gladiuk, a British Columbia native who leads all rookies nationally with 12 goals. Gladiuk, a center, has lined up on a different line than right wing Gensler, giving the Falcons great balance in scoring. Gladiuk is Atlantic Hockey’s Rookie of the Week for the fourth time this season.

At the next level – Among the most inspiring stories in the NHL season’s first week are three undrafted former collegians who have made their NHL debuts. Tampa Bay’s Cory Conacher, last year’s AHL MVP, is just two years removed from Canisius and the first player in Lightning history to record points in his first three games with the team. Two others previously patrolled the UMass blueline and have doubled the number of former Minutemen in the league. Mike Kostka (UMass 2004-08) in Toronto and Matt Irwin (UMass 2008-10) in San Jose missed each other in Amherst by a year, but both made their NHL debuts over the weekend.
NOTE: Check out the college connections for every NHL team – on the ice, in the front office and in the system – on College Hockey, Inc.’s NHL Matchup Tool.

Passing fancy at SCSU – St. Cloud State, sitting tied for first in the WCHA, started a stretch of 14 straight conference games to end the season with a sweep of Denver last weekend. Leading the way is senior Drew LeBlanc, who missed all but 10 games last season with a broken leg. LeBlanc has 27 assists – five more than the players ranking second nationally in that category – and has set up at least one goal in 13 straight games.
Friday and Saturday’s games are on Fox College Sports.

Sauer keeps giving back – Legendary Wisconsin and Colorado College coach and CC alum Jeff Sauer retired from the Badger bench 10 years ago, but his coaching expertise continues to serve other levels of the game. Sauer has served as the head coach of the U.S. National Deaf Team and the U.S. National Sled Team, and both have big events coming up. The sled team will host the 2013 USA Hockey Sled Cup this weekend in Indian Trail, N.C., and in April Sauer will lead the deaf team to the 2013 World Deaf Hockey Championships in Vantaa, Finland. Sauer remains involved in the NCAA level as well, serving as a Special Assistant in the WCHA conference office.