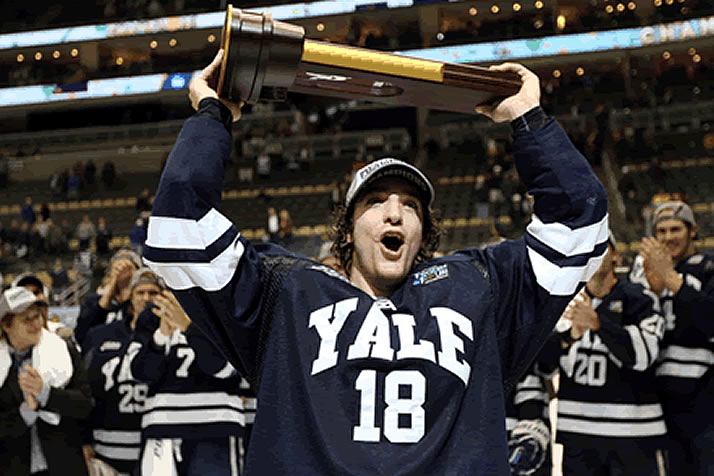 Kenny Agostino returned to Yale for his senior season after winning a national title in 2013 (Photo by Larry Radloff).

This story originally appeared as part of a four-page special section on college hockey in the Nov. 4, 2013, issue of The Hockey News. Check out another story from that section: Building Brains & Brawn.

Kenny Agostino (Flanders, N.J./Delbarton Prep/CGY) returned to his New Jersey home for a long weekend in mid-April having just achieved one dream and another within his grasp.

The junior forward at Yale had seen his NHL rights traded for a legend and won a national championship with Yale. Now, he was returning home to discuss his professional hockey options.

It was perhaps the most momentous fortnight in his life. Yet with a title in his pocket and a limitless future, he realized one thing was still missing: his college degree.

“His opportunity to sign an NHL contract will be there,” Yale coach Keith Allain said. “That wasn’t going to change. If he left school his opportunity to get a Yale degree would have been greatly diminished. He understood that.”

Agostino, a fifth-round draft pick of the Pittsburgh Penguns, is now property of Calgary following the trade for Jarome Iginla. He hopes to follow in the footsteps of other late-round gems like Joe Pavelski (Wisconsin), Matt Moulson (Cornell) and Colin Greening (Cornell) to the NHL.

Education was a major reason Matthew Peca (Petawawa, Ont./Pembroke-CCHL/TB), a seventh-round pick of the Tampa Bay Lightning, opted to attend Quinnipiac rather than play major juniors in his native Ontario. The opportunity to develop his mind as well as his body has done wonders for his hockey ability.

Now in his junior year at Quinnipiac, Peca is viewed as one of college hockey’s most exciting players and among the Lightning’s most promising prospects.

“The extra time to develop is huge for any player,” Peca said. “Being a late-round draft pick, you’re not necessarily on the fast track to the NHL. Teams think you can get bigger, stronger and smarter as a player, and a great way to do that is to go to college.”

In 2012-13, 64 former NCAA players who had been drafted in the fifth round or later played in the NHL. Those players utilized the development time and opportunities in college hockey to beat the odds, which show that less than 10% of late-round draft picks succeed in the NHL.

Riley Barber (Livonia, Mich./U.S. NTDP/WSH), a sixth-round pick of the Washington Capitals in 2012, traveled extensively in high school as part of the U.S. National Developmental Program. The son of former NHL-player Don Barber, he chose college at Miami University of Ohio.

In 2012-13, during a standout college season in which he became the first RedHawk to win Central Collegiate Hockey Association rookie of the year, he helped the U.S. win gold at the World Junior Championships in Ufa, Russia.

His stock in the Capitals organization continues to rise. Barber had no doubts about returning to school for his sophomore season.

“Could he physically be ready to go in every night and compete every night? I don’t know. Probably,” Miami coach Enrico Blasi said. “But to be able to sustain it over a long period of time…you don’t want to be a flash in the pan. You want to be someone who plays for 10-15 years. The emotional grind it takes to play at the NHL level isn’t easy. (College) is an opportunity for him to play at a high level, be consistent, be a top player and be in difficult situations. All the things hopefully that will prepare him (for a pro career.) When it gets to be a job, those things aren’t things you focus on.”

College life offers young players a chance to compete at a high level while maturing both emotionally and mentally. That kind of stability, in a crucial development stage of their life, can be beneficial on several levels.

“A lot of people talk about that, but it’s a big plus for guys coming into college who plan on moving on,” Blasi said. “Has it always been like this? I like to think it has.”

In all, 30% of NHL players developed in college. Given that success, more and more players are seeing the benefits of continuing their hockey and education in college.

Peca, like Barber and many other late-round picks, is much closer to being considered NHL ready thanks to his time in college.

“Being drafted isn’t the end all, be all,” Peca said. “There’s still work to be done and ways to improve yourself. When I was coming to Quinnipiac, I knew I’d be here for a while. You don’t want to hold yourself back if you think you’re ready. But I know I have much to improve on.”