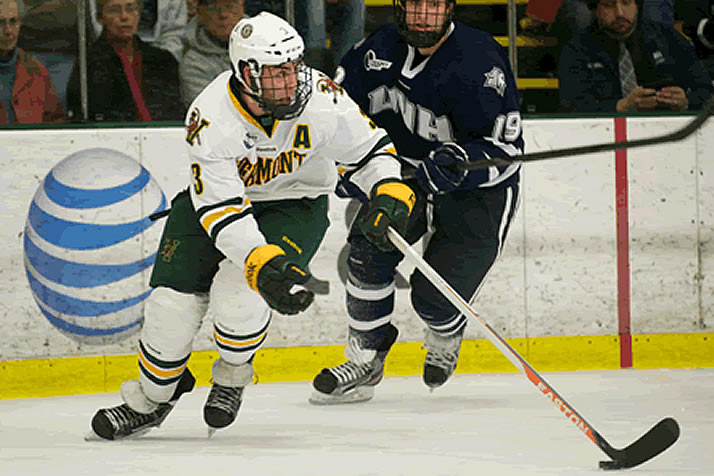 McCarthy leading Catamounts – Vermont won its own Catamount Cup this weekend and now hosts two more non-league foes with hopes to build upon its seven wins in eight games stretch. Leading the way offensively is fifth-year senior and team co-captain Chris McCarthy (Collegeville, Pa./U.S. NTDP). McCarthy, who has battled through a shoulder injury that cost him almost all of the 2011-12 campaign, has 16 points in 17 games, including four multiple-point efforts. Just a Vermont's ascension has been relatively quiet – the Catamounts snuck into the USCHO.com poll at No. 20 this week – their top scorer has quietly become an offensive leader in Hockey East.

Ithaca Journal: Bardreau has emerged from 2013 a stronger player, leader
College Hockey News: Bentley not just another face in the crowd

Three More Notes No One Should Be Without

B.C. homecoming – Seven British Columbia natives get a rare chance to represent their NCAA schools on their home turf this weekend as North Dakota and Princeton visit Burnaby, B.C., for the Great Northwest Showcase. The games – each team will play University of British Columbia and Simon Fraser – are exhibitions, but they will certainly be meaningful, especially for those locals. North Dakota’s brother tandem of Mark and Mitch MacMillan (Penticton, B.C./Penticton-BCHL) will be playing close to home for the first time since their stints with the Penticton Vees of the BCHL.
The Province: NCAA hockey royalty pays a visit

Gensler a home run for Bentley – Bentley senior Brett Gensler (St. Charles, Mo./Youngstown-USHL) hails from just outside of St. Louis, but claims much more success at Fenway Park than his hometown Cardinals. Gensler accounted for all three Falcon goals in a 3-2 win against Holy Cross to kick off Frozen Fenway for this year. Gensler and the Falcons are 7-0-1 in their last eight after a 2-7-0 start and host Niagara for two this weekend. Gensler ranks third among all players in career goals (61) and fourth in points (133) and is hitting his stride after what was for him an uncharacteristically slow start.

Summit meeting – The Mariucci Classic could feature a No. 1 vs. No. 2 showdown Saturday night as top-ranked Minnesota welcomes Ferris State to its field. They would need to beat (or lose to) Colgate and Rensselaer, respectively, to set up that 1 vs. 2 matchup. It’s the second year in a row the No. 1 team will be at the Mariucci Classic, as Boston College visited last year and suffered an 8-1 loss in the title game against the hosts.

20 of the 25 players named to the U.S. men’s Olympic team on Wednesday played college hockey.