Familiar Faces Fill Frozen Four
BC, Minnesota, North Dakota and Union return after - at most - a two-year Frozen Four absence. 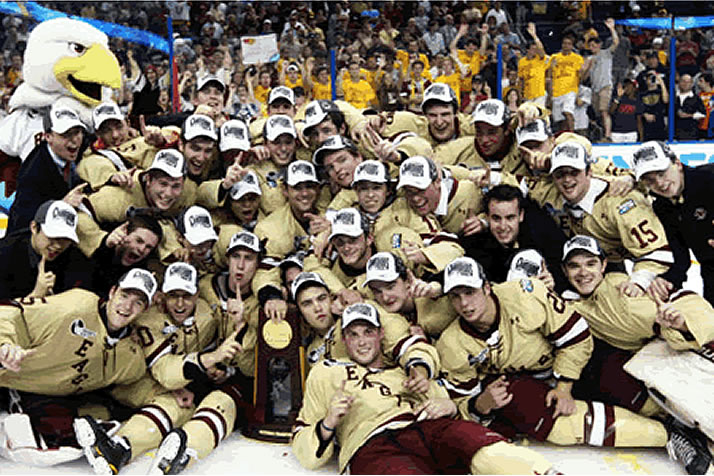 Boston College is seeking its fourth title in seven years in Philadelphia.

Each team has players with Frozen Four experience, as 39 players are in their second Frozen Four (Union-14, BC-12, Minnesota-11, North Dakota-2).

All for one – Three teams in the field were No. 1 seeds in their NCAA regional: Boston College, Minnesota and Union. It's the fourth time in the 16-team tournament (which began in 2003) that three No. 1 seeds have reached the Frozen Four, and the first since 2010 in Detroit. North Dakota made the Frozen Four as a No. 4 seed, the seventh 4 seed in the past seven years to get this far. From 2003-07, no No. 4 seeds played in the Frozen Four.

Best of the best – These four teams have been the best in the nation not just this season, but since the current senior class stepped foot on campus. They rank 1-4 in wins and winning percentage over the last four seasons combined. Only four schools have won at least 20 games each season in that time, and three of them will be in Philadelphia: Boston College, North Dakota, Union and Denver.

Banner seasons – Union is the only team in the field to win its regular-season and playoff conference championships, sweeping ECAC Hockey. Boston College and Minnesota both won their regular seasons. North Dakota finished second in the NCHC standings and third in the NCHC tournament.

Senior leadership – The Frozen Four teams don't have large senior classes - each team has four or five seniors - but they have been impactful. Three of the top four scorers for both BC and Union are seniors. North Dakota captain Dillon Simpson (Edmonton, Alta./Spruce Grove-AJHL/EDM) leads UND and is one of the top all-around defensemen in the country. Minnesota senior captain Nate Condon (Wassau, Wisc./Fargo-USHL/COL) had four points in the West Regional and two of the Gophers' regular defensemen are seniors.

Young guns – Freshmen have played a big role on the four Frozen Four teams, particularly at Boston College and Minnesota, whose rookie classes lead the nation in goals (Minnesota, 56) and points (Boston College, 132). Each team has used at least two freshmen defensemen in at least half of the team's games.

Future watch – Thirty-nine players in the Frozen Four have been drafted by NHL teams, up from 15 in last season's Frozen Four. Minnesota and North Dakota (14 each) are the top two teams nationally in NHL draft picks, while Boston College (10) ranks fourth. Gostisbehere is the lone draft pick on Union's roster.

We meet again – Minnesota and North Dakota have met 290 times in the past, third-most of any college hockey rivalry (Michigan-Michigan State and Colorado College-Denver the only two with more). The former WCHA rivals aren't on each other's regular-season schedules until 2016-17. Boston College and Union have played just once in the past, though the stakes were high: the Dutchmen ended BC's season a year ago in the East Regional in Providence.

Family matters – Three of the teams have brothers on their rosters, led by the three Reillys on Minnesota (Connor, Mike and Ryan). Boston College has the Gaudreaus (Johnny and Matthew), while North Dakota has the MacMillans (Mark and Mitch). Brothers have been teammates on a handful of recent NCAA champions, most recently when Boston College won in 2010 with Joe and Steve Whitney and Cam and Tommy Atkinson.

Smart guys – The NCAA measures student-athletes' collective progress toward their degrees with an Academic Progress Rate (APR) for each team. Hockey has the best average score of any men's sport - a 983 four-year average out of 1000. Each of the Frozen Four teams exceeds that average, in this order: Union (995), North Dakota (989), Minnesota (987) and Boston College (986).

BCS busters – For 11 straight years, at least one school that plays Division II or III in sports other than hockey has reached the Frozen Four (Union is this year’s).

First timer? – Two of the last three national champions were first-time winners (Minnesota Duluth '11, Yale '13). Union is the only chance to continue that trend as the other three teams have each won at least five championships and rank among the top seven programs all-time in titles.

Hobey watch – Four candidates for the Hobey Baker Award – which will be presented Friday in Philadelphia - are in the field in Minnesota's Adam Wilcox, Union's Shayne Gostisbehere and Boston College's Johnny Gaudreau and Kevin Hayes. Wilcox, Gostisbehere and Gaudreau were all Player of the Year in their respective conferences.

From all over the map – Players from 18 states, six Canadian provinces and Washington, D.C., are in the four-team field, led by 27 Minnesotans (21 of them on the Gophers).