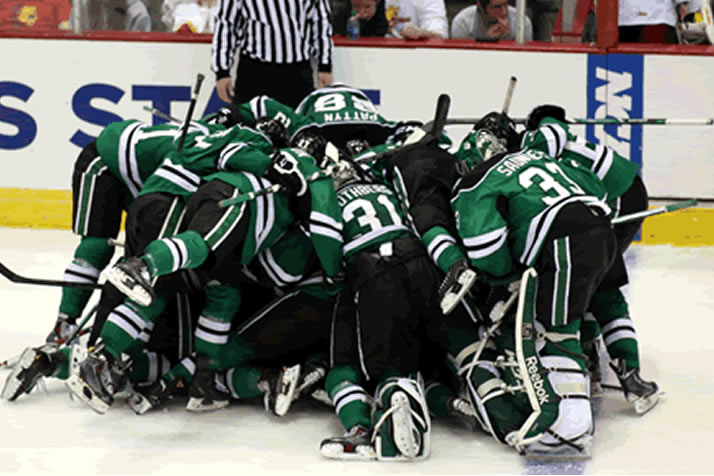 Three No. 1 seeds and a No. 4 won their NCAA regionals and advanced to the NCAA Frozen Four, to be held April 10 and 12 at Philadelphia's Wells Fargo Center.

Boston College and Union will face off in one semifinal, while Minnesota meets longtime rival and the lone No. 4 seed in the field, North Dakota, in the other.

The 2014 Frozen Four features no returnees from last season, but all teams that have proven to be powers in the sport. Boston College will match Michigan's record with its 24th NCAA Frozen Four appearance. The Eagles, Union and Minnesota were all at the 2012 Frozen Four in Tampa Bay, while North Dakota returns for the first time since 2011.

The Boston College-Union game will pit the regular-season champions in Hockey East and ECAC Hockey, respectively. The two teams have met just once before, as Union ended BC's season a year ago in the first round of the NCAA Tournament.

It's a different story in the other semifinal, as longtime rivals Minnesota and North Dakota meet. The two former WCHA members have met 283 times but did not this season while playing in the Big Ten and NCHC, respectively. This will be the teams' fifth NCAA Tournament meeting.

North Dakota is the seventh No. 4 seed to make the Frozen Four in the last seven seasons. This marks the third time since the tournament expanded to 16 teams in 2003 that three No. 1 seeds have reached the Frozen Four and the first since 2010.