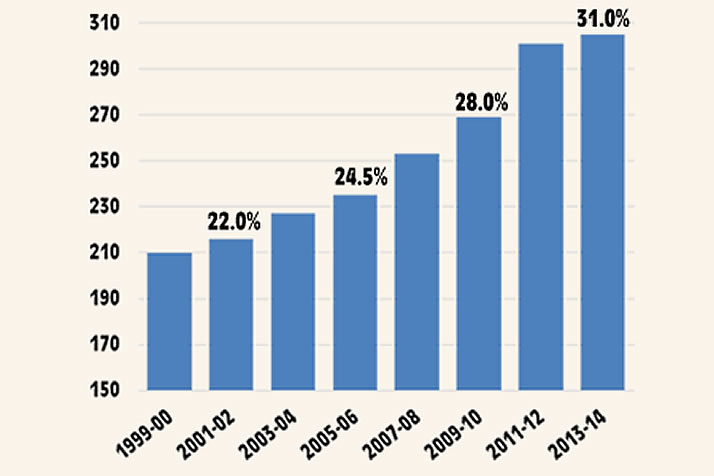 A record 305 former U.S. college hockey players appeared in the NHL this season, making up 31% of all NHL players, also an all-time high. Those totals represent sharp increases from as recently as 2002-03, when 211 former NCAA players accounted for 21.1% of the NHL.

College hockey’s presence in the NHL can be seen not just in volume, but also in the impact of those players. Five of the NHL’s top 10 goal scorers played NCAA hockey, and the 24 former college goaltenders in the league posted a cumulative save percentage (.916) and goals-against average (2.43) that were better than the league average. Eleven former college players led their NHL teams in goals and 10 led their teams’ defensemen in scoring.

“The college hockey experience is unmatched and brings variables for players that are not available through other avenues,” said Dave Ogrean, executive director of USA Hockey. “Being part of a college hockey program is a terrific place to grow and mature as both a player and person and it’s terrific to see the number of college players going on to play professionally continue to grow.”

Forty-nine schools had a former player in the NHL this season, also an all-time high. Boston College (26), Wisconsin (21), Michigan (19), Michigan State (17) and Minnesota (16) had the most former players in the NHL.

NCAA in the NHL

“In today’s day and age, more and more college players are making it to the NHL level and having an impact,” said former Vermont star Patrick Sharp, who led the defending Stanley Cup champion Chicago Blackhawks in goals and points. “To be someone who other college players look up to is a great feeling.”