Alums Advance in Cup Playoffs
Half of the top 14 scorers in round one played college hockey. 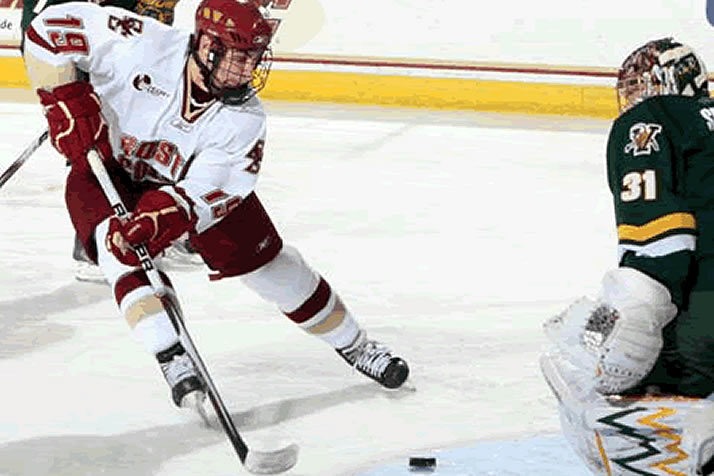 Chris Kreider is one of seven former Boston College stars remaining in the chase for the Stanley Cup.

Twenty-nine NCAA schools have a former player still alive in the chase for the Stanley Cup, led by Boston College (7) and Wisconsin (6). Twelve other schools have multiple players on the eight remaining teams.

Former college players - who made up a record 31% of the NHL this season - were dramatic contributors in the opening round. Zach Parise (North Dakota) and Paul Stastny (Denver), whose teams faced off in round one, share the league lead in playoff scoring to this point with 10 points. The top two scoring defensemen are Pittsburgh teammates Matt Niskanen (Minnesota Duluth) and Paul Martin (Minnesota). Martin and fellow former Golden Gopher Alex Goligoski share the NHL lead in plus/minus.

In all, 4 of the top 6 playoff scorers and 7 of the top 14 played college hockey.

Each second round series will feature at least 10 former college players on the ice. Each series also features a general manager who played college hockey.

With at least 4 NCAA alums on each of the remaining teams, the number of former college players who have won the Stanley Cup is assured of reaching at least 200 this season.

Check out some of the NCAA-related storylines below, with the number of former college players on each roster in parentheses, and find even more detail by visiting our NHL Matchup Tool.