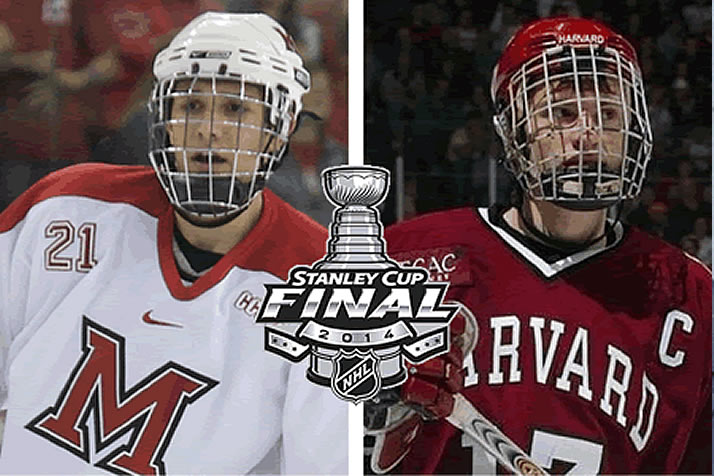 Alec Martinez (left) and Dominic Moore scored the goals that sent the Kings and Rangers, respectively, to the Cup Final.

The alums include leaders on both teams. Los Angeles, which features four former NCAA players, has 2012 Conn Smythe Award winner Jonathan Quick (Massachusetts) in goal and three stalwart defensemen who developed in college: alternate captain Matt Greene (North Dakota), Alec Martinez (Miami) and Willie Mitchell (Clarkson). All four were on the Kings team that won the Cup two years ago.

Martinez and Dominic Moore (Harvard) scored the goals that clinched each team's spot in the Cup Final.

Regardless of the result, the 200th former college player all-time will have his name engraved on the Stanley Cup, joining the list of 197 who have won it as players. Alabama-Huntsville could have its first Cup winner in Ranger backup goaltender Cam Talbot, while Moore could join Craig Adams as the only Harvard grads to hoist the Cup.

Seven of the 12 alums in the Final were All-Americans in school: Martinez, Mitchell, Quick for LA and Brian Boyle (Boston College), Hagelin, Moore and Martin St. Louis (Vermont) for the Rangers. Kreider is the only player in the final to have won an NCAA title (2010 and '12 with Boston College).

Below is a look at the alums on each roster courtesy of College Hockey Inc.'s NHL Matchup Tool: