Calder Cup Finals Feature Alums
Top scorers for both St. John's and Texas played NCAA hockey, plus many others in the series. 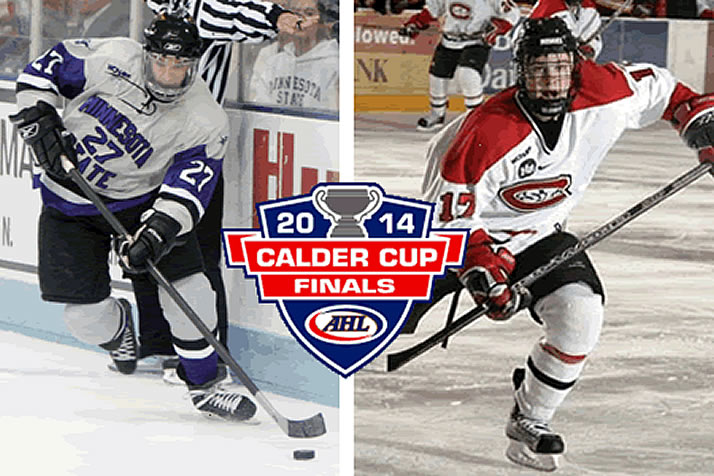 Two 2007 All-WCHA selections who, at the time, were Washington Capitals draft picks lead their teams into the 2014 Calder Cup Finals, as the St. John's IceCaps and Texas Stars will meet for the championship of the AHL.

St. John's forward Andrew Gordon and Texas forward Travis Morin both lead their teams in playoff scoring and helped them secure berths in the finals with wins Tuesday night. Seven years ago, when Gordon was with St. Cloud State and Morin with Minnesota State, the duo tied for fifth in conference scoring with a North Dakota sophomore named Jonathan Toews.

The Calder Cup Finals will being on Sunday, June 8, in Texas, with Game 3 moving to St. John's on Wednesday, June 11.

With Gordon and Morin leading the way, both teams have impressive contingents of former college stars. Nine former NCAA players have played for St. John's in the Calder Cup playoffs, while Texas has used seven. Those 16 players represent 13 schools, with only Colorado College (Kris Fredheim and Toby Petersen), Ferris State (Zach Redmond and Blair Riley) and Minnesota State (Morin and Kael Mouillierat) boasting multiple participants. Redmond and Riley and Morin and Mouillierat were college teammates. CC and Minnesota State are both assured of an alum on the championship team.

Gordon's 16 points through 16 playoff games lead all AHL players, while Morin and teammate Mike Hedden, a Neumann College grad, are just one point behind. St. John's defenseman Will O'Neill, a former captain at Maine, leads all defensemen in the Finals in scoring with 13 points in 13 games.

Here's a look at each of the former NCAA players who have played for these teams in the playoffs: