Draft Offers Second Chance for Some
Several current college players selected in Philadelphia will be eligible for a second - or even third - year. 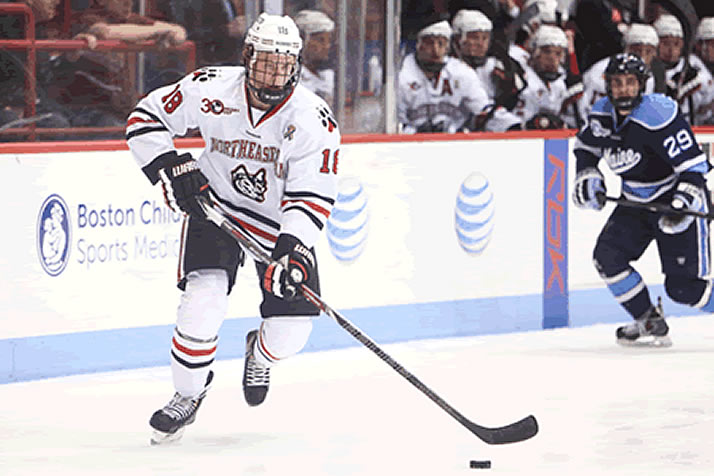 The bulk of the 60-plus current and future NCAA players taken in this weekend's NHL Draft will be of the future variety - players who will arrive on campus this fall or next fall.

Because of changes to the NHL collective bargaining agreement fewer players are selected after their first college season than 10 years ago - and those who are were typically overlooked in a previous draft.

With another year of experience and the opportunity to have proven themselves at the college level - against older, stronger, faster players - players who were completely overlooked a year ago can become hot commodities.

Expect St. Lawrence's Gavin Bayreuther to be one of the first of the second-chance kids to go sometime Saturday morning. The rising sophomore for the Saints ranked third among all NCAA defensemen in scoring last year, showing an offensive ability that NHL scouts covet.

"Every player develops at different times and different speeds," said Saints head coach Greg Carvel. "For Gavin, he came out of prep school at Holderness where I don’t think he was on anyone’s radar. He went to the USHL and was still overlooked a bit. Then, when he came to us, he was able to demonstrate what he could do at a very high level of competition, in one of the best leagues in the country. We had the number one power play in the country and he ran it from the top. To be able to showcase that ability at such a high level really exposed people to what a good player he can be."

Searching for the next Shayne

Second- and third-year draft-eligible players like Bayreuther can turn into draft steals for their NHL teams. Two of the best defensemen in college hockey last season - Union's Shayne Gostisbehere and Denver's Joey LaLeggia - were drafted in 2012 after impressive freshman seasons. The NCAA Frozen Four MVP, Gostisbehere is considered one of the Philadelphia Flyers' top prospects and LaLeggia, an Edmonton pick, was the NCHC Defenseman of the Year.

Northeastern's John Stevens took advantage of an impressive season against mature competition as a freshman. Stevens, the son of an NHL coach, was hardly an unknown before arriving at Northeastern. His 22-point rookie campaign was impossible to ignore and his coach, former NHL scout Jim Madigan, knows his former colleagues took notice.

"[This past year] helps him because he’s shown what he can do at a high level," said Madigan. "In prep school he was a very good player and then went out to Dubuque and won a Clark Cup. Each year he continued to get stronger, quicker and improved his overall game. The extra time has allowed him to reach a point where he’s likely to be drafted. This year he played against men and that’s a good indicator for NHL teams of what type of player he is.”

While defense is often cited as the toughest position to adjust to for players coming to college, those who master that transition earn attention. Like Gostisbehere, this year's draft could see several defensemen get selected after exceptional first seasons.

Among them are Union's Jeff Taylor, Boston College's Scott Savage, Quinnipiac's Devon Toews and Michigan Tech's Shane Hanna. In Hanna's case, his production took off as soon as he gained a comfort level in college hockey.

“He led all defensemen in our league in scoring as a freshman, and he did most of that in the second half after he adjusted to the college game," said Huskies head coach Mel Pearson. "At 6-0, 195, he’s a little smaller but very offensively skilled – great vision, a good mind and he actually played pretty well defensively for us as well."

The chance for scouts to measure Hanna against WCHA competition was a benefit, even after playing in a strong junior league in the BCHL.

“No question, he was able to step up and play against some pretty good players, guys who can step in and play in the NHL next year or even at the end of this past season," Pearson said. "Lots of times scouts aren’t quite sure about a player and how his game will translate to another level. Once they get a chance to see him against older, stronger competition it can really help.”

Sometimes, players who were afterthoughts on the draft floor a year ago can be coveted by 30 teams after a year of college seasoning.