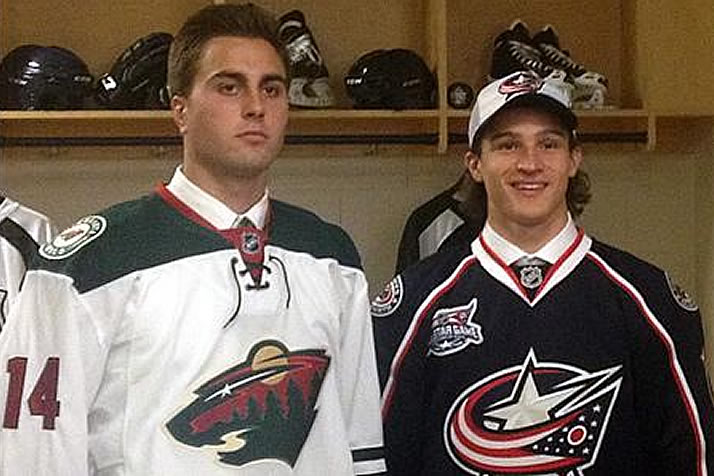 Alex Tuch (left) and Sonny Milano, headed to BC in the fall, were taken two picks apart Friday night.

Four incoming college freshmen were selected in Friday night’s first round of the 2014 NHL Draft at Wells Fargo Center:

The four selections mark a sharp increase from last season, when none of the 30 first-round selections went on to play college hockey. Larkin, at No. 15, is the highest NCAA selection since another Michigan player, Jacob Trouba, went to Winnipeg at No. 9 two years ago.

Larkin, Milano and Tuch were all teammates this past season with the U.S. National Team Development Program, which competes in the United States Hockey League (USHL). Schmaltz, who will join his brother Jordan at North Dakota in the fall, played for the USHL’s Green Bay Gamblers.

According to a study released earlier this week by College Hockey Inc., those first-round picks who play NCAA hockey have a 70% chance of playing 300-plus games in their NHL careers, compared to 57% of other first-round picks. That study, published on collegehockeyinc.com and featured by media outlets such as ESPN.com, the Washington Post and TheScore.com, evaluated the 210 first-round pick taken in the drafts from 2000 through 2006.

The draft continues Saturday with rounds two through seven, with roughly 60 more current or future NCAA players expected to be selected. At least 60 college players have been selected in each of the last 12 NHL drafts.