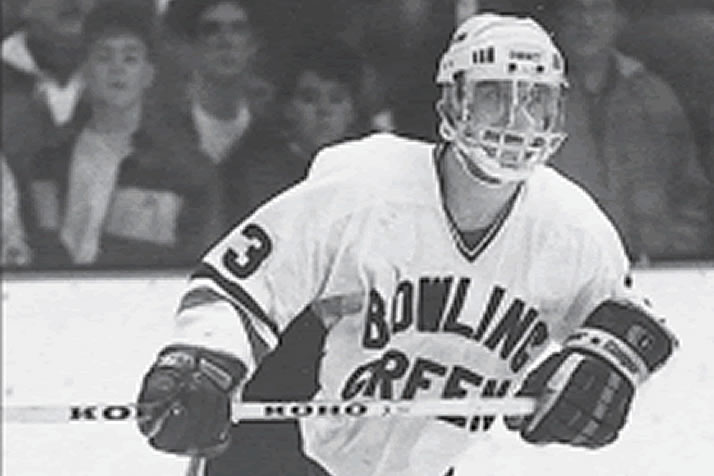 Rob Blake had 59 points in 42 games as a defenseman his junior year at Bowling Green.

Former Bowling Green star and legendary NHL and Canadian defenseman Rob Blake will be inducted in the Hockey Hall of Fame's class of 2014, the Hall announced Monday.

Collegians in the Hall of Fame

Blake will be the 15th former college player inducted in the Hall, joining six others who were inducted as builders. This marks the seventh consecutive year that a former NCAA player has been among the Hall of Fame's inductees. He is the first former Falcon to be honored by the Hall.

Blake, who will be inducted Nov. 17, is joined in the 2014 class by Peter Forsberg, Dominik Hasek, Mike Modano, Pat Burns and Bill McCreary.

Star as a Falcon

Blake, from Simcoe, Ontario, developed into a superstar at Bowling Green. He posted a 13-point freshman season and was selected by the Los Angeles Kings in the fourth round of that spring's NHL Entry Draft. An 11-goal, 21-assist effort followed as a sophomore that earned him second-team All-CCHA honors.

Playing for head coach Jerry York (now at Boston College) and assistants Buddy Powers, Terry Flanagan and Wayne Wilson (now at RIT), Blake emerged as a dominant force as a junior. He finished second on the team in scoring behind Nelson Emerson, with both earning first-team All-America and All-CCHA honors. Blake totaled 23 goals and 36 assists in just 42 games, one of the best seasons every by an NCAA defenseman. He was named the team MVP.

He joined the Kings after Maine knocked the Falcons out of the NCAA Tournament and scored his first NHL goal in the playoffs that spring.

Blake played for three teams in his 20-year, 1,270-game NHL career and is now back with the Kings, where he is once again working with Emerson and now celebrating a Stanley Cup championship. Blake is the Kings' assistant general manager, while Emerson heads up the team's player development group.

Blake's playing career included a Stanley Cup with Colorado in 2001, three Olympic appearances for Canada and a Norris Trophy in 1998.

"It’s a great honor to be included in the group selected today and to join all the great players that reside in the Hockey Hall of Fame,” said Blake. “I feel fortunate and thankful as the game of hockey has been very good to me and my family over the past 25 years."