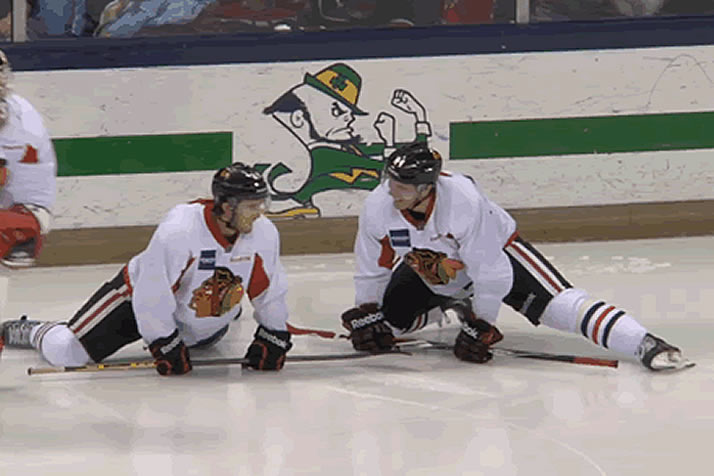 For Notre Dame alum Stan Bowman, the familiarity of the Fighting Irish campus combined with the sparkling new Compton Family Ice Arena makes for the perfect place to start the NHL season.

Bowman, the vice president and general manager of the Chicago Blackhawks, brought his team back to campus for training camp for the second straight year. The Hawks were welcomed by throngs of fans, a beautiful campus and a state-of-the-art training facility.

"For the Blackhawks, it's the same selling point we give to recruits," said Fighting Irish head coach Jeff Jackson. "It's a big-time environment, but a very focused environment. That's the way it is at Notre Dame. You have the facilities to be successful but a comfortable, welcoming campus without a lot of distractions."

The Hawks' appreciation for the environment - especially the arena - is clear.

"This is top-notch ... it has to be one of the best facilities in all of college," former Minnesota star Nick Leddy told UND.com. "Everything is outstanding. They really did a great job here with the stands being over the top. That makes it a lot louder. For the players, they did a great job with the recovery room, the workout room ... everything is Grade A."

Adam Clendening, who played at another one of the NCAA's top arenas at Boston University, shared that excitement.

"This really is a beautiful facility," Clendening said. "The shooting room here is fun. That's probably the most popular thing. The guys spent a bunch of time in there. The other thing I really noticed is that the fans help make it really special. They're right on top of you. The way everything is, it's really set up for a good atmosphere."

Those positive reviews are gratifying for people like Jackson, who was hands-on in the design of the facility, and alums like Stephen Johns, who got to start his first NHL training camp at his alma mater.

Everything I've heard from the guys is that they love it," Johns said. "They think it's an unbelievable facility. They especially love the rapid shot. It's very nice.

"The guys love the campus, too. A lot of them were walking around talking about how beautiful it is here. That makes me happy. I have a lot of pride in going here. There has been a lot of talk by the guys about coming here for a football game."

It's not just the Blackhawks who benefit from their visit. The Notre Dame team, in the midst of preparing for their own season, gets to interact with NHLers and see what preparation is like at the next level.

"It's been great for our guys," said Jackson. "Both years we've had a big dinner which brings both teams together and gives our guys a chance to interact with them. Our coaching staff gets to meet with their staff as well.

"We have a great relationship with our alumnus, Stan Bowman, and now we have Stephen Johns there. There really is more to the relationship than just an NHL team being in the area."