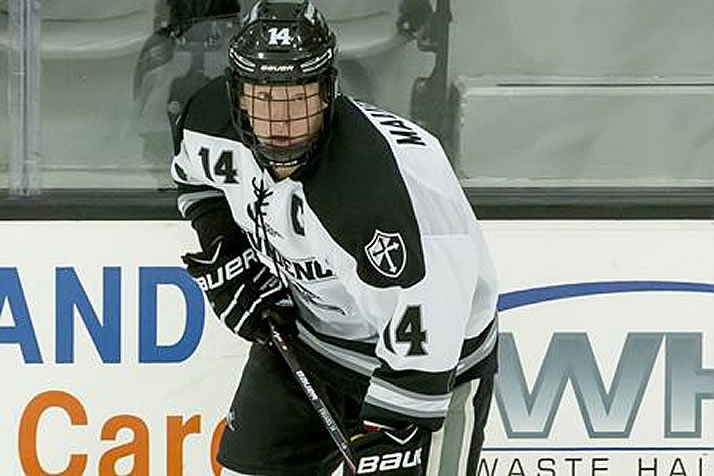 Providence makes its second long trip of the young season this weekend, as the No. 5 Friars visit No. 3 North Dakota. It’s also the second time they’ll play within a few states of co-captain Ross Mauermann’s hometown (Janesville, Wis./Janesville-NAHL). Mauermann, who turned 24 this week, was looking for anywhere to play when his junior career ended; he joined head coach Nate Leaman’s first team at Providence as a walk on. Since then he’s led the Friars in scoring three times and is a big reason they are favored to win Hockey East this season.

BGSU’s Quebec connection – Before sophomores Kevin Dufour (Quebec City, Que./Carleton Place-CCHL) and Pierre-Luc Mercier (Montreal, Que./Andre Laurendeau-CEGEP) arrived at Bowling Green, it had been nearly 30 years since the Falcons featured a player from Quebec. The duo is being rewarded for blazing a trail to Ohio. Dufour has six goals, leading all Division I players, with the last three assisted by Mercier. Falcons assistant coach Ty Eigner discovered the two Quebecois at a camp run by Clarkson assistant coach Phil Roy in Montreal – and those two teams face each other this weekend in Potsdam, N.Y.

SCSU’s gauntlet continues – No. 9 St. Cloud State travels to No. 2 Union this weekend, two weeks after splitting at home with No. 4 Colgate. No. 2 Minnesota looms in another week, making up the nation’s toughest early-season schedule. It’s quite an introduction to the starting goaltending job for sophomore Charlie Lindgren (Lakeville, Minn./Sioux Falls-USHL), taking over for Anaheim Ducks signee Ryan Faragher. Lindgren brings impressive credentials to the job – he played in two Minnesota State High School tournaments with Lakeville North and was named USA Hockey’s Junior Goaltender of the Year while with Sioux Falls.

Plebes lead Army – Three freshmen are atop the Army scoring leaders as the 2-2-0 Black Knights continue a seven-game season-opening homestand this weekend against Atlantic Hockey favorite Robert Morris. Rookie Tyler Pham (Fort Collins, Colo./Indiana-USHL) leads the way with a point in each game thus far, picking up where he left off in junior hockey last season. Pham finished his three-year USHL career by captaining the Indiana Ice to the Clark Cup championship last May.

SLU has a winner in net – St. Lawrence heads to Miami for two games coming off a 2-0 shutout of Ferris State. Freshman goaltender Kyle Hayton (Denver, Colo./Sioux City-USHL) has played all four games for the 2-2-0 Saints and his save percentage has improved with each start. Hayton has a winning pedigree – in 2011, as a student at Shattuck St. Mary’s in Minnesota, he led Shattuck to a USA Hockey national championship and won an inline hockey national championship with the Colorado Kodiaks.

Minnesota’s returning firepower – Top ranked Minnesota begins a stretch in which six of its next eight games are against in-state rivals with a home series vs. Bemidji State. The Golden Gophers will raise last season’s Big Ten championship banner on Friday and honor first-team All-American Mike Reilly (Chanhassen, Minn./Penticton-BCHL/CBJ) Saturday. Reilly is one of three returning All-Americans for Minnesota, along with Kyle Rau (Eden Prairie, Minn./Sioux Falls-USHL/FLA) and Adam Wilcox (South St. Paul, Minn./Tri-City-USHL/TB), making the Gophers the first team in a decade with three returning All-Americans (since Boston College in 2004-05: Andrew Alberts, Patrick Eaves and Ryan Shannon).
Friday’s game is on BTN; Saturday is on FS North+

The past week has featured three head-to-head matchups of former NCAA goaltenders in the NHL. Those goalies posted a .964 save percentage and 0.98 goals-against average in those games (Jonathan Quick vs. Brian Elliott, Ryan Miller vs. Ben Scrivens, Ben Bishop vs. Scrivens).