Top 12 Preseason Storylines
59 teams chase a trip to Boston as the 2014-15 season gets underway this weekend. 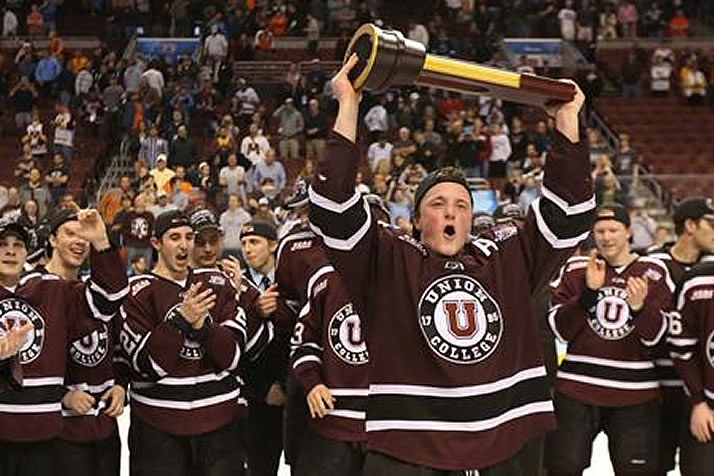 Who will follow Union as national champion next April in Boston? (Photo by Larry Radloff)

Another new champion? – Union’s national championship in 2014 marked the second straight season and third time in four years that a program won its first title. Prior to 2011, it had been 18 years since a first-time champ was crowned. An abundance of talented players has created incredibly parity in college hockey, and another first-time champ could be crowned in Boston in April. Half of all Division I teams have made the 16-team NCAA tournament in the last three years (29) and 11 in last year’s field were seeking their first championship.

Back for more – While early departures for the pros are commonplace across college sports – and 28 underclassmen left early for NHL deals in the offseason – several stars decided to return to campus to continue working toward their degree, develop their game and pursue a championship. Miami welcomes back its top four scorers, all of whom could have opted for the NHL. Minnesota reached the Frozen Four a year ago with 14 NHL draft picks on the roster, but none left early. In Hockey East, all-conference stars Mike Matheson (Boston College; Pointe-Claire, Que./Dubuque-USHL/FLA), Devin Shore (Maine; Ajax, Ont./Whitby-OJHL/DAL) and Jon Gillies (Providence; S. Portland, Maine/Indiana-USHL/CGY) will lead their teams. North Dakota’s Jordan Schmaltz (Verona, Wis./Green Bay-USHL/STL), a first-round pick of the St. Louis Blues, returns as well, with an added bonus – he welcomes freshman teammate Nick Schmaltz (Verona, Wis./Green Bay-USHL/CHI), his brother, who is a first-round Chicago pick.

Elite goaltenders – All three returning Hobey Baker Award finalists are goaltenders, suggesting that it’s a position of strength entering the season. C.J. Motte (Ferris State; St. Clair, Mich./Waterloo-USHL), Joel Rumpel (Wisconsin; Swift Current, Sask./Penticton-BCHL) and Adam Wilcox (Minnesota; South St. Paul, Minn./Tri-City-USHL/TB) make up that group, and they have plenty of support. Providence junior Jon Gillies was a first-team All-American as a freshman, while Colin Stevens (Union; Niskayuna, N.Y./Boston Jr. Bruins-EJHL) and Jimmy Sarjeant (Mercyhurst; Aurora, Ont./Newmarket-OJHL) both return after earning first-team all-conference honors. Eight of the top nine and 12 of the top 15 goaltenders in save percentage last season are back for 2014-15.

More: Draft Spotlight Shines on NCAA
College hockey will feature prominently at the top of the 2015 NHL Draft thanks to the presence of Jack Eichel (BU), Noah Hanifin (BC) and Zach Werenski (Mich.) on campus.

Future stars – A year after a record 305 former NCAA players appeared in the NHL, there are dozens taking the ice in Division I this year poised to make that jump in the near future. Seven first-round picks are among the nearly 200 NHL draft picks on college rosters, including at least one on 40 teams. Many more will get NHL opportunities as undrafted free agents – 21 free agents signed NHL contracts after last season, and 58% of all undrafted NHL players last year came from the NCAA ranks.

Wide open Hobey race – Johnny Gaudreau has taken his dazzling talents to the Calgary Flames, leaving a wide-open race for the Hobey Baker Award as the nation’s top player. Miami’s Austin Czarnik (Washington, Mich./Green Bay-USHL) was a finalist two years ago, and figures to be in the mix along with goaltenders Motte, Rumpel and Wilcox (mentioned above). Others who could be in the mix include first-team All-American defenseman Mike Reilly (Chanhassen, Minn./Penticton-BCHL/CBJ) of Minnesota and top active career goal scorer Cody Wydo (Allen Park, Mich./Motor City-NAHL) of Robert Morris.

New buildings – Western New York is home to college hockey’s two newest arenas, as RIT and Canisius will christen new rinks in 2014-15. RIT’s Polisseni Center is a 4,000-seat facility that is among the nicest on-campus buildings around Division I. Canisius moves to the HarborCenter, the new facility built by the Buffalo Sabres in downtown Buffalo that will also serve as the NHL team’s training facility. In addition, several schools will unveil extensive renovations to their rinks, including Harvard, Miami and North Dakota. In all, more than 25% of all Division I programs have opened new or renovated arenas in just the last four seasons.

New coaches – Four teams welcome new leaders behind the bench in 2014-15, all with unique backgrounds. Only one – David Berard at Holy Cross – has been a Division I head coach before, and that was on an interim basis at Connecticut two seasons ago. Princeton’s Ron Fogarty was a very successful Division III coach at Adrian College, while Colorado College’s Mike Haviland won a Stanley Cup in his pro coaching career. Lake Superior State welcomes Damon Whitten, who had been an assistant coach at rival Michigan Tech.

NCAA and the NHL

Smart guys – The talent U.S. college hockey players display on the rink is matched by their performance in the classroom. Hockey enjoyed the best score of any men’s sport in the latest NCAA Academic Progress Rate, released last spring, and ranks fifth in the NCAA’s Graduation Success Rate, trailing only gymnastics, fencing, lacrosse and skiing.

Big stages – College hockey teams will take the ice at eight NHL arenas in 2014-15 – beginning with early-season games at Buffalo’s First Niagara Center and New Jersey’s Prudential Center and extending through the Frozen Four at Boston’s TD Garden. In addition, six teams will play in outdoor stadiums, with Bowling Green and Robert Morris facing off at Toledo’s Fifth Third Bank Park and a doubleheader set for Chicago’s Soldier Field. More than 150 NCAA games will be televised and available nationwide in 2014-15.