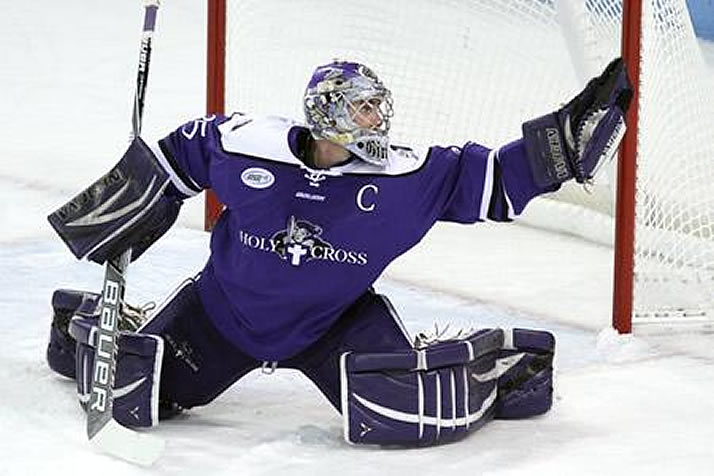 First-year head coach David Berard leads a young Holy Cross team, but his team boasts experience at the most important position. Senior Matt Ginn (Lindsay, Ont./Victoria-BCHL) leads all active goaltenders in career saves (3,055) and minutes (6,619) after his sixth career shutout and second of the season, Nov. 15 at Army. Ginn and junior Matt Vidal (Manorville, N.Y./Bay State-EJHL) are co-captains for the Crusaders, who host Bentley Tuesday night.
GoHolyCross.com: Saving the best for last

Ref's son leading LSSU - Lake Superior State, which started 0-9-0, is 3-2-0 in its last five thanks in large part to junior Bryce Schmitt (Minot, N.D./Bismarck-NAHL) and his team-leading 10 points. Schmitt has a pair of those game-winning goals and had two points in Saturday’s overtime win. He’s also been whistled for just one penalty all year, which is another reason for dad to be proud – Schmitt’s father, Mike, is a former WCHA official and current NCHC officiating supervisor.

Italian-born spark for Irish – Notre Dame welcomes three top teams to its Shillelagh Tournament this weekend (Union, Ohio State, Western Michigan), looking to snap out of a 1-4-2 stretch. One of the Irish’s offensive catalysts has been junior Thomas DiPauli (Caldaro, Italy/U.S. NTDP/WSH), who has all three of his goals and eight of his 11 points in Notre Dame wins. He has more than doubled the five points he recorded in an injury-filled sophomore season and is just one point shy of his freshman year total. DiPauli and the Irish face defending national champion Union Friday, where DiPauli’s brother, Theo, is a junior. The family moved to the Chicago area from Italy in their early teens to help the boys pursue their hockey goals.

Developing star at UNO – The lone NCHC series of the week features two ranked teams as Dean Blais’s Nebraska Omaha team returns to his roots at North Dakota. The Mavericks split with No. 8 Minnesota Duluth last weekend thanks to a four-point game from sophomore Austin Ortega (Escondido, Calif./Fargo-USHL). The skilled 5-foot-8, 174-pound Ortega has made such big strides defensively since last year that earlier this season Blais said he could develop into an All-American before his career is out.

Penn State on the big stage – In just its second year of Big Ten play, Penn State is no stranger to big venues. With wins at Xcel Energy Center and CONSOL Energy Center last year, plus a game at Wells Fargo Center, the Nittany Lions hit the ice at their fourth NHL arena in a two-year span Saturday vs. Cornell at Madison Square Garden. With a win, the 7-3-2 Nittany Lions would match last season’s victory total – and provide further proof that they are ready for the big stage.

RPI’s travel log – Thanksgiving is a busy travel week for many, but few will rival Rensselaer. The Engineers are at New Hampshire Tuesday before a weekend series at Michigan, traveling by bus on five of the six days in the week. RPI is 4-2-1 in its last seven after a 1-5-0 start and is getting healthier – three key players are expected back in the lineup this week after missing time due to injury or illness.

The 17 NHL goaltenders who played college hockey are a combined 78-52-20 this season.