Effort Launched to Save UAA Program
‘Save Seawolf Hockey’ seeks to raise $3 million for the program. 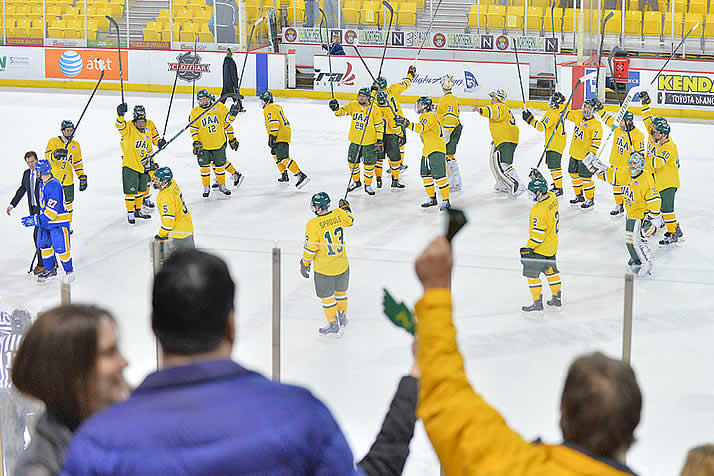 Alaska Anchorage’s program was founded in 1979-80.

Supporters of the Alaska Anchorage men’s hockey program have launched “Save Seawolf Hockey,” with the goal of saving the team that the university announced plans to eliminate in August due to budget cuts.

Community members, hockey fans and alumni announced the formation of the group at a news conference last week in Anchorage. Save Seawolf Hockey is working to raise $3 million by the end of February – $1.5 million in donations for the 2021-22 season and $1.5 million in pledges for 2022-23.

“UAA hockey has a lot of support in this community,” said Katie Bethard, chairperson of the fundraising efforts. “While $3 million is a lofty goal, we think we can get there. The Seawolf hockey program and its players have contributed to the Anchorage community for more than 40 years. It has elevated the game of hockey in a town that prides itself on the sport and the generations of athletes that have played the game – whether on house teams, comp, pro or adult league. It’s our turn to show them our appreciation.”

The introduction of Save Seawolf Hockey brought support from UAA alumni and Anchorage natives. The group announced initial pledges of $150,000, plus a $250,000 matching donation from the Eugene Giza Fund.

“My experience with UAA hockey hits pretty close to home,” said Swayman, who recently signed with the Boston Bruins after a three-year career at Maine. “Truthfully, it’s the reason why I started to play hockey and eventually chose the college hockey route. Every one of my coaches growing up played at UAA, and I wouldn’t be where I am without their experience.”

Head coach Matt Curley expressed his hope that the program can continue to impact the Anchorage community and beyond.

“Like you, I believe in this program – what it means, what it represents, and what it does for the community at large,” Curley said. “We are hoping to continue that tradition by giving future young men that opportunity that so many before them have had to share in this Alaska lifestyle and fulfill their dreams of becoming Division I hockey players.”

For more information or to donate to Save Seawolf Hockey, visit SaveSeawolfHockey.com.