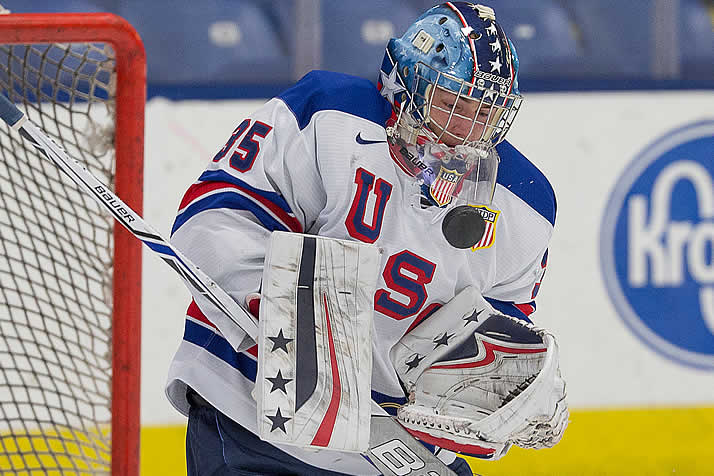 The United States National Junior Team – led by a record 22 NCAA players – posted a 2-0 victory over Canada to win the gold medal at the 2021 World Junior Championship Tuesday night in Edmonton.

After an opening game loss to Russia, the U.S. reeled off six straight victories to win gold. In the gold medal game, the Americans posted goals in the first and second periods and held off Canada to earn the win.

“I’m very proud of this group of guys, we really came together as a team over the course of this tournament,” said head coach Nate Leaman, the Providence head coach who led an all-NCAA coaching staff. “We played a great Canadian team today and we’re very fortunate to have beat them. I’m proud of how this team played together. This will be a memory they have forever.”

Trevor Zegras, who was a freshman at Boston University last season, led the tournament in scoring with 18 points and was named its Most Valuable Player. Boston College sophomore Spencer Knight (Darien, Conn./U.S. NTDP/FLA) and Michigan sophomore Cam York (Anaheim, Calif./U.S. NTDP/PHI) joined Zegras as the top three U.S. players as selected by the team.

Knight made 34 saves in the gold medal game to post his third shutout in six games in the tournament.