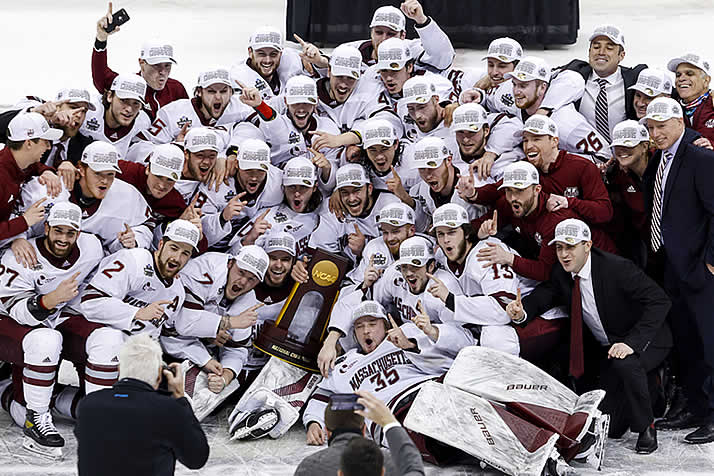 Massachusetts, with an impressive championship game performance, captured the school’s first national championship Saturday night at PPG Paints Arena in Pittsburgh. The Minutemen’s convincing 5-0 win against St. Cloud State marked the culmination of an uncertain season in college hockey, one that was abbreviated and for many teams paused due to the pandemic.

Saturday, however, was a showcase of the sport, with UMass even close to full strength thanks to the return of goaltender Filip Lindberg and forward Carson Gicewicz from Covid-related quarantine. Lindberg was perfect, stopping all 25 shots he faced and setting an NCAA Tournament record with his fourth career shutout in the event.

“I can't say a lot to describe it. The feeling's unbelievable,” said captain Jake Gaudet. “To be here four years, the guys that have come through this program and worked really hard, to wear a letter and help lead our team to the biggest national stage is one of my proudest achievements and it's something I'll never forget.”

Saturday’s game started fairly evenly, with St. Cloud State controlling some shifts and even hitting the crossbar while the game was still scoreless. UMass broke through when Aaron Bohlinger and Ryan Sullivan were sprung on a two-on-none, with Bohlinger finishing it for his first career goal.

From there, the Minutemen seemed to take over play. Two more rare goal scorers – Reed Lebster and Philip Lagunov – had the next two goals, late in the first and early in the second. Lagunov’s was a shorthanded tally, featuring a highlight-reel move past a St. Cloud State defenseman.

“Our depth has been a huge reason why we made it to the game tonight,” Gaudet said. “I'm so happy for these guys to put pucks in the net; they completely deserve it. We wouldn't be here without a solid four-line team and we have six great D that play outstanding and a great goalie. And I think that's the difference between their team this year and our team two years ago is we can roll four lines be successful.”

Two of the team’s top goal scorers, defenseman Matthew Kessel and forward Bobby Trivigno, added the fourth and fifth goals. Lindberg and the Minutemen protected the 5-0 lead for the final 14 minutes and erupted in celebration afterwards.

- Massachusetts becomes the 22nd team to win the NCAA Division I men’s hockey championship and the first first-time champion since Providence in 2015.

- Lindberg, a Finland native, is the first non-North American goaltender to win the NCAA championship game.

- Bohlinger was the seventh player in the 13-game tournament to score his first goal of the season.

- Kessel’s goal was his 10th of the season, breaking a tie with teammate Zac Jones for the national lead among defensemen.