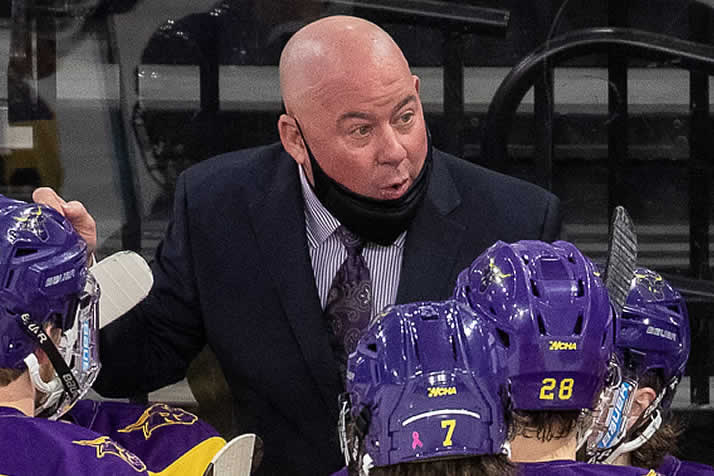 Mike Hastings has won more than 20 games in each of his nine seasons at Minnesota State.

Minnesota State head coach Mike Hastings has been named the 2021 winner of the Spencer Penrose Award as the national coach of the year, the American Hockey Coaches’ Association announced Tuesday.

Hastings led the Mavericks to their fourth consecutive WCHA regular-season championship and their first Frozen Four in 2020-21. They carry a 22-4-1 record into Thursday’s semifinal matchup with St. Cloud State.

This marks the second time Hastings has won the Penrose Award, having first captured it in 2015. His staff includes associate head coach Todd Knott and assistant coach Darren Blue.

This season was Hastings’ sixth MacNaughton Cup in nine seasons at the helm at Minnesota State, a run that has featured 20-plus wins each season. The Mavericks enter the Frozen Four with the nation’s best team defense (1.52 goals against per game) and the fifth-best offense (3.56 goals per game). Their 25.8% power play ranks fourth in the nation.

Hastings has a career record of 236-89-24. His winning percentage of .711 is the best among all active Division I men’s head coaches.

The runner-up for this year’s Spencer Penrose Award was Greg Carvel of Massachusetts.

The Spencer Penrose Award is named in memory of the Colorado Springs benefactor who built the Broadmoor Hotel Complex, site of the first 10 NCAA championship tournaments.