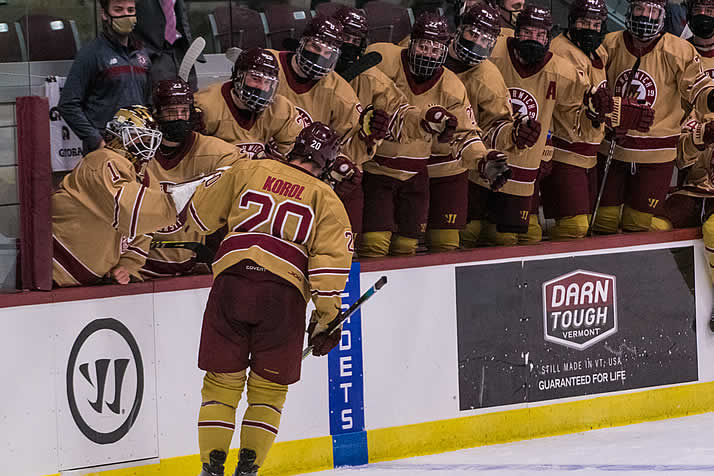 Michael Korol is currently studying for the MCAT and plans to attend medical school.

Norwich University senior Michael Korol, whose efforts to support young hockey players have stretched from his home province of Saskatchewan to his college community in Vermont, has been named the 2021 recipient of the College Hockey Inc. Scholarship, presented by JLG Architects. Korol will receive a $2,500 postgraduate scholarship that was created to celebrate an NCAA hockey student-athlete who helps build the game through their support of the next generation of hockey players.

The 2021 scholarship is given in honor of JLG founder Lonnie Laffen, a passionate college hockey supporter who passed away in December.

“Michael is an impressive young man, someone Lonnie Laffen would have been proud to recognize. Honoring Michael’s constant commitment to the sport of hockey and the next generation of players is why Lonnie wanted to create this scholarship,” said College Hockey Inc. Executive Director Mike Snee. “Thank you to JLG Architects for supporting this initiative and joining with College Hockey Inc. to celebrate what Michael and so many NCAA hockey playing women and men do to grow hockey.”

“We are thrilled to present the 2021 College Hockey Inc. scholarship to Michael Korol. Not only is he a fantastic team player on the ice, but he’s also someone who helps elevate the game off the ice,” said JLG Architects CEO Michelle Allen. “We are so proud of all of the student-athletes who submitted applications and work hard to create positive growth in the future of hockey.”

A native of Saskatoon, Sask., Korol played junior hockey with the Humboldt Broncos, where he volunteered with Humboldt Minor Hockey, Humboldt Special Olympics Floor Hockey and the Big Brothers Big Sisters program. With these organizations he helped aspiring hockey players grow their skills and introduced the game to new audiences. Korol left Humboldt for Norwich a year before the organization’s tragic 2018 bus crash, which he says provides “a daily reminder of how grateful I am for an opportunity several of my fallen teammates did not get.”

While in college, Korol volunteered with Northfield Youth Hockey, helping run practices and hosting teams at Norwich games. He played floor hockey with Northfield Elementary School students and spent time with those in the after-school program. He served as the Norwich team’s community service liaison and was a co-captain as a senior.

This season, with his father’s health failing, Korol spent the fall semester studying remotely. While home, he volunteered as an assistant coach with the Saskatoon Sabercats Midget AA team. Korol’s father, Robert, passed away in December 2020 after a battle with cancer.

“I’ve been so fortunate through the game of hockey, I’ve always had people who have helped every step of the way,” Korol said. “Those people have shaped my life and shaped me as a person. Out of respect for the game of hockey I feel almost a sense of obligation to give back and do the same for the next group of players.”

“I have always gained valuable experiences from giving back to the game,” he added. “This year in particular took me back to the reasons why I started playing hockey. When I got out on the ice my only concern was giving those kids a positive experience like I had as a young player.”

“I am extremely excited for Michael,” said Norwich head coach Cam Ellsworth. “He is an exceptional person who has persevered through quite a bit in the last four years. Regardless what Michael was facing personally, he had a relentless positive attitude and consistently put others first in service, whether it be his teammates, our Norwich campus community or his local communities both in Vermont and Saskatchewan. Thank you to College Hockey Inc. and JLG Architects for recognizing Michael and awarding him with this scholarship.”

Korol plans to use the College Hockey Inc. Scholarship to pursue a degree in medicine, with hopes of becoming a pediatrician. He is currently preparing for the MCAT and expects to apply to the University of Saskatchewan medical school in the fall.

“It is a huge honor to receive this scholarship and I am extremely grateful,” Korol said. “I have so much respect for groups like JLG Architects and College Hockey Inc. that offer these opportunities. I hope I can give back in similar ways someday.” The

College Hockey Inc. Scholarship, presented by JLG Architects, was first awarded in 2020 and is open to any NCAA hockey player (men’s or women’s, of any division). Applications required an essay on the student-athlete’s contributions to the youth hockey community, which could be accompanied by videos or other supplemental information. The winner was selected by a committee made up of representatives of College Hockey Inc. and JLG Architects.

JLG is a 100% employee-owned architecture firm with over 150 architects, interior designers, community and fundraising specialists, and related staff across eleven offices in Minnesota, Massachusetts, South Dakota, and North Dakota, and has been named one of the Top 25 Sports Facility Architecture Giants in the U.S. by Building Design+Construction, the Best Ice Hockey Arena Architects in the Upper Midwest U.S. by LUXlife International, and one of 50 Most Admired Companies in America by MSN Money. JLG’s dedicated ice hockey studio is the Preferred Architecture Partner of the National Collegiate Hockey Conference and the Western Collegiate Women’s Hockey Association.

The co-founder of JLG Architects and a lifelong hockey fan, Lonnie Laffen dedicated his career to “rethinking the rink” by challenging long-established perceptions about how fans, players, and facility managers are made better by the gameday and practice environment. For over 30 years, was directly involved in the planning and execution of all of JLG’s ice projects across the nation, from Sacred Heart University to Colorado College. In addition to his focus on the sport, Lonnie was a passionate advocate for the state of North Dakota, serving as a State Senator for Grand Forks District 43 from 2010 – 2018. Lonnie passed away in December 2020, leaving behind a legacy of hockey excellence, which will live on through the work by his dedicated sports architecture team.