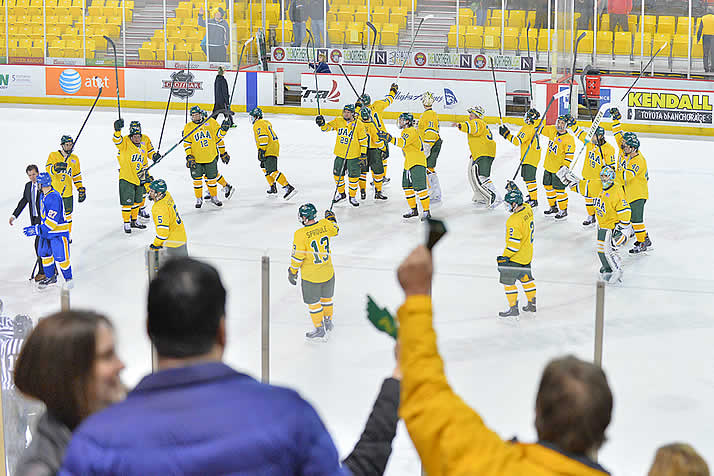 The Seawolves started play as a Division I independent in 1979-80.

Alaska Anchorage will return to the Division I men’s ranks in 2022-23, the school announced Tuesday, after a fundraising effort generated more than $3 million to Save Seawolf Hockey.

The school had announced plans in 2020 to discontinue hockey, but alumni and fans rallied in support of the program.

“Thanks to the passionate and determined fundraising efforts of coaches, student-athletes, alumni, boosters, community leaders and corporate donors from across our city, state and nation, UAA Seawolf hockey earned reinstatement,” UAA Chancellor Sean Parnell said. “This is a day to celebrate and express gratitude to our community and to Save Seawolf Hockey supporters for their unwavering commitment.”

The current total raised behind the Save Seawolf Hockey effort is more than $3.1 million, assuring hockey’s future in Seawolf Nation. Support came from across the country, including the NHL’s newest franchise, the Seattle Kraken.

“Today is about much more than dollars raised. It’s about hope restored and dreams realized,” said UAA Director of Athletics Greg Myford. “While the financial support is important and necessary, our community of supporters refused to let the vision for Seawolf hockey fade. A mighty thank you to all who contributed to this day.”

Moving forward, UAA Athletics will partner with the Seawolf 5th Line, a newly named organization of community supporters and fans, to plan and execute multiple aspects of the team’s operations, including continued fundraising support and outreach to grow the UAA hockey fan base. Additionally, the program anticipates active outreach on campus so that students can benefit from hands-on experience in the team’s growth and success.