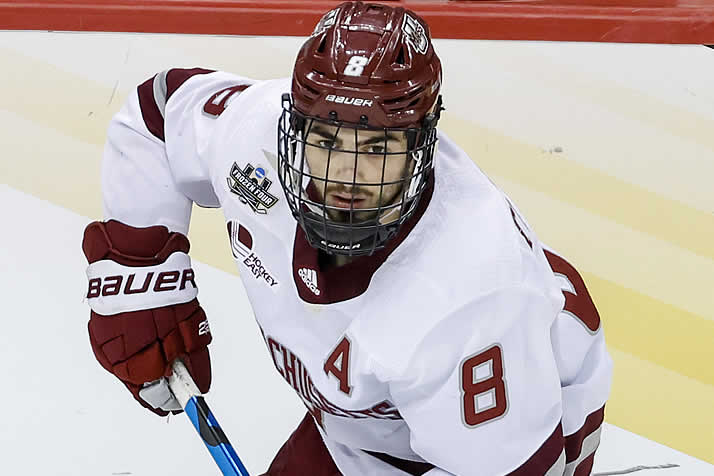 Bobby Trivigno is the nation’s top returning scorer for the defending champions.

After a 2020-21 season that was delayed, played mostly in empty buildings and missing 10 programs due to the impact of COVID-19, excitement is near an all-time high as NCAA Division I men’s hockey prepares to drop the puck this weekend.

The season ahead will feature tremendous parity and an overall talent level that may be unmatched in college hockey history.

Below are some of the top storylines to watch as the season gets underway.

Talent abounds – The NCAA’s decision to grant an additional year of eligibility to those who played last year contributes to a wealth of talent on rosters across the country. Seven players enter the year having already surpassed 100 career points; only three players entered last season having hit the century mark.

Anyone’s game – If the preseason polls are any indication, the national championship is very much up for grabs as we enter 2021-22. Eight teams received first-place votes in the USCHO.com and USA Today/USA Hockey Magazine polls, including each of the Frozen Four teams from a year ago. Massachusetts, the defending champions, starts the season at No. 1, with top scorer Bobby Trivgno (Setauket, N.Y./Waterloo-USHL) back to lead the Minutemen.

Wolverines to watch – Yost Ice Arena is home to seven of those first-rounders, as Michigan boasts the most first-round picks on one team in NCAA history. No. 1 overall selection Owen Power (Mississauga, Ont./Chicago-USHL/BUF) returns for his sophomore campaign to lead a team that has 12 total draft picks on the roster.

Year of the D II? – Two years after three defensemen made up the entire Hobey Hat Trick, we could be looking at another “year of the defenseman” in college hockey. Power and North Dakota sophomore Jake Sanderson (Whitefish, Mont./U.S. NTDP/OTT) are two top-five NHL draft picks entering their sophomore years. Two All-Americans as sophomores – Western Michigan’s Ronnie Attard (White Lake, Mich./Tri-City-USHL/PHI) and Boston College’s Drew Helleson (Farmington, Minn./U.S. NTDP/COL) – are back for their junior years on their respective bluelines.

New faces, new places – New this year is immediate eligibility to first-time transfers between schools, leading to a big spike in the number of transfers on NCAA rosters. Among them are some of the sport’s biggest names, including All-American goaltender Matt Galajda (Aurora, Ont./Victoria-BCHL) and leading active career scorer Brandon Kruse (xxxx). Galajda has moved from Cornell to Notre Dame, while Kruse has moved from Bowling Green to Boston College. Of the seven active players with 100-plus career points, five are at new schools this fall.

Century mark – College hockey history dates to 1896, and this year some of its most storied programs are celebrating their 100th seasons. Boston College, Boston University, Clarkson and Michigan Tech – which have combined to win 13 NCAA titles – all hit three digits this year, one year after Minnesota celebrated its 100th year. In addition, Princeton’s Hobey Baker Rink, the second-oldest arena in college hockey behind Northeastern’s Matthews Arena, turns 100 in 2021-22.

What’s old is new – There’s a mix of old and new in the Midwest, where eight schools have formed the Central Collegiate Hockey Association – reviving the conference that existed for 43 years from 1971-2013.

Among the CCHA members is St. Thomas, which joins the Division I ranks this season after elevating its athletic department from Division III. This marks the second year in a row that Division I welcomes a new team, after Long Island joined last season.

March on Miller – Only two of the top 10 Hobey Baker Award finalists from last season return: both goaltenders playing in the state of Minnesota. Minnesota State senior Dryden McKay (Downers Grove, Ill./Madison-USHL) headlines a talented group of goaltenders returning in 2021-22. McKay, who had 10 shutouts to lead Division I last year and has xx in his career, is closing in on Ryan Miller’s all-time NCAA career record of 26 shutouts. Minnesota graduate student Jack LaFontaine (Mississauga, Ont./Penticton-BCHL/CAR) edged McKay for last year’s Mike Richter Award and is back to lead the Big Ten-favorite Golden Gophers.

In all, 13 of the top 20 goaltenders in save percentage from last season are back this year.