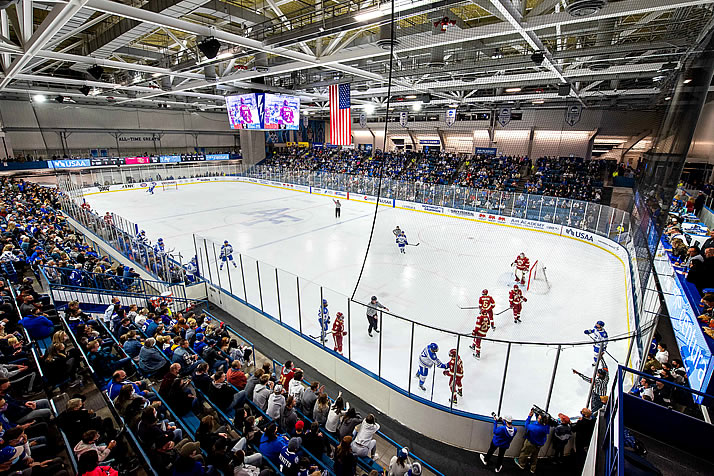 The Ice Breaker Tournament, which began in 1997 in Madison, Wis., annually brings together four teams, typically from different conferences, to celebrate the start of the college hockey season. College Hockey Inc. administers the Ice Breaker on behalf of the Hockey Commissioners Association.

“Air Force is excited to be part of the first ever co-hosted Ice Breaker Tournament,” said Air Force Director of Athletics Nathan Pine. “We have a rich history of involvement in the event, and our 2016 championship is still a fond milestone in our program’s history. The 2022 Ice Breaker will be an outstanding tournament and we are excited to expose our visiting guests to the specialness of the Academy.”

“We’re excited to join the Air Force Academy in welcoming the Ice Breaker Tournament back to the state of Colorado in 2022,” said Denver Vice Chancellor of Athletics Karlton Creech. “Thank you to College Hockey Inc. and the Hockey Commissioners Association for the opportunity to showcase four great teams to kick off the 2022-23 season. This is the third time that Denver has hosted the Ice Breaker and we're looking forward to another successful event at Magness Arena.”

The 2022 Ice Breaker Tournament will be the fourth time the tournament has been played in Colorado (1999 in Denver, 2005 in Colorado Springs, 2016 in Denver).

“Air Force is very excited about co-hosting the Ice Breaker with Denver,” said Air Force Head Coach Frank Serratore. “We have participated in several Ice Breakers over the years and it's a great event. With that, I believe the co-hosting format we are introducing will establish a new standard taking the event to another level. First off, the co-hosting format will enable more programs the ability to bid on the event. Additionally, the format ensures all four games are played at prime times in front of healthy crowds. This is not only good for the institutions involved, but college hockey, the fans and, most importantly, the student-athletes.”

“It’s an honor for the Pioneers to once again play in the Ice Breaker Tournament, and we're looking forward to joining Air Force and Coach Frank Serratore in hosting two historic programs in Notre Dame and Maine to begin next season,” said Denver Head Coach David Carle. “I was able to be a part of the Ice Breaker the last time DU hosted in 2016, and it was a fantastic event to be a part of. The tournament is truly one of the top showcases for college hockey in the country, and we're thrilled that our great fans will get the chance to witness it once again.”