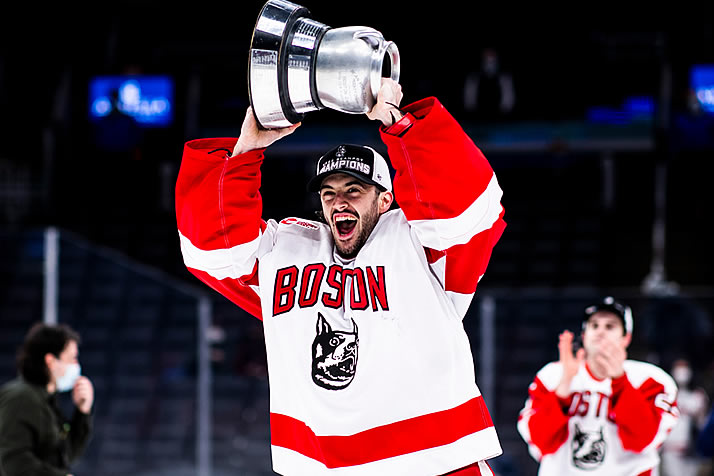 Vinny Duplessis and the Terriers are on a 13-1-1 run (Photo: Matt Woolverton/BU Athletics)

Back on Nov. 27, Boston University suffered a 4-3 loss to Cornell at Red Hot Hockey, leaving the Terriers with a 4-9-2 record and a rather bleak outlook in terms of the national tournament. The ensuing two months, however, could not have been more divergent. The Terriers have rattled off a 13-1-1 run since their loss to Cornell at Madison Square Garden and have very much entered the national picture, sitting 14th in the current Pairwise rankings. Now, back from a week off last weekend and a Beanpot championship the week prior, No. 13 BU returns to action this weekend with a home-and-home against rival Boston College.

The Athletic: Ranking the top free agents from college hockey, junior and Europe
ESPN.com: Top Frozen Four contenders, Olympians who caught our eye
The Athletic: Diss tracks, dorm life and a 2-year plan to build an Avalanche star and rebuild a sinking program: Cale Makar at UMass
NHL.com: Hughes reflects on his brother Luke’s play at Michigan
NHL.com: Power, Beniers among NHL prospects who impressed at 2022 Olympics
Grand Forks Herald: UND equipment manager, UMD goalie lean on each other as they battle cancer

With the college hockey regular season winding down, a pair of schools have already clinched league titles while the four remaining conference races remain up in the air.

Elsewhere, Michigan holds a two-point lead on Minnesota entering the final weekend of Big Ten play, Quinnipiac takes a four-point leader over Clarkson into the ECAC’s final weekend, North Dakota sits one point in front of Denver with two weeks left in the NCHC schedule, and Hockey East co-leaders UMass and UMass-Lowell are two points in front of UConn and Merrimack with two weeks remaining.

The Hockey Commissioners association (HCA) on Tuesday unveiled the 11 semifinalists for the 2021-22 Mike Richter Award, which goes annually to the top goaltender in NCAA Division I men’s hockey.

Alabama-Huntsville alum Jay Woodcroft, who recently replaced Dave Tippett behind the Edmonton Oilers’ bench, is off to a 5-1 start to his NHL coaching career entering Wednesday’s clash with Tampa Bay. The Oilers had won each of Woodcroft’s first five games prior to Sunday’s loss to Minnesota – with a 22-8 goal differential – making him just the fifth coach in NHL history to start his career 5-0-0. Woodcroft was a four-year standout at UAH from 1996-97 through 1999-2000, compiling 50 goals and 123 points in 113 collegiate games with the Chargers. | Former Collegians in NHL Front Offices

Quinnipiac sophomore G Yaniv Perets made ECAC history last night, setting a new single-season conference record with his 11th shutout of the year. Perets stopped 21 shots – six of them coming during a 5-on-3 penalty kill – in the Bobcats’ 4-0 win over Yale … RIT scored two goals in a four-second span during last Friday’s 4-2 win at Niagara, tied for the fourth-fastest pair of goals by a team in NCAA Division I men’s hockey history. Freshman F Carter Wilkie scored the go-ahead PPG at 19:49, and senior F Will Calverly followed with an empty-netter at 19:53 on the ensuing faceoff. The record for fastest two goals is two seconds, set by Colorado College on Feb. 1, 1952 … Former collegiate goaltenders Jussi Olkinuora (Denver, 2011-13) and Matej Tomek (North Dakota, 2015-17; Omaha, 2018-19) earned medals at the Winter Olympics last week in Beijing. Olkinuora won gold with Finland, while Tomek captured the bronze with Slovakia. Both made one appearance during the preliminary round for their respective teams.