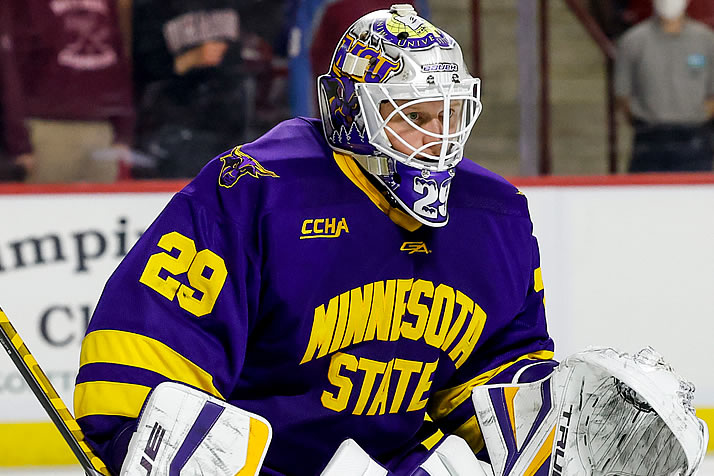 The men’s college hockey regular season is now in the rearview mirror with all six conference tournaments in full swing. Hockey East got the week started Wednesday night with a trio of first-round matchups that saw Boston College down New Hampshire in overtime (4-3), Providence defeat Vermont (2-1), and Merrimack defeat Maine (6-1). Those three winners now advance to the Hockey East Quarterfinals on Saturday.

Atlantic Hockey, the Big Ten, CCHA and ECAC all began their conference tournaments last week and continue play this weekend, while the NCHC Tournament gets underway Friday. For playoff brackets and additional information, visit the tournament homepages below:

McKay, a semifinalist for the 2022 Mike Richter Award, is 33-4-0 this season with a 1.28 GAA and .932 save percentage. McKay and the top-ranked Mavericks will face Northern Michigan in the CCHA Mason Cup Semifinals on Saturday.

Perets is 18-4-2 on the year and leads the nation in both GAA (0.82) and save percentage (.955). His GAA would be a new NCAA single-season record if the season ended today, and his save percentage would trail only Jimmy Howard’s record-setting .956 mark from 2003-04:

Perets and the sixth-ranked Bobcats will host St. Lawrence on Friday in the ECAC Hockey Quarterfinals.

Schmaltz added four more points (two goals, two assists) in his next game Tuesday at Detroit, giving him the franchise record for most points (11) in a two-game span. He now has 16 goals and 37 points in 38 games overall this season.

On Wednesday, the Big Ten announced its finalists for the conference’s 2021-22 individual awards, the NCHC unveiled its all-conference team, and Hockey East named its all-rookie squad … Minnesota Duluth senior D Matt Anderson (UDFA) became the program’s all-time games played leader Saturday when he skated in career tilt No. 175 … A former Bulldogs defender, longtime NHLer Norm Maciver, was named associate general manager for the Chicago Blackhawks on Wednesday. Maciver, who starred at UMD from 1982-86, had been serving as director of player personnel for the Seattle Kraken.