Notes: Down the Stretch They Come
Final two league races on the line 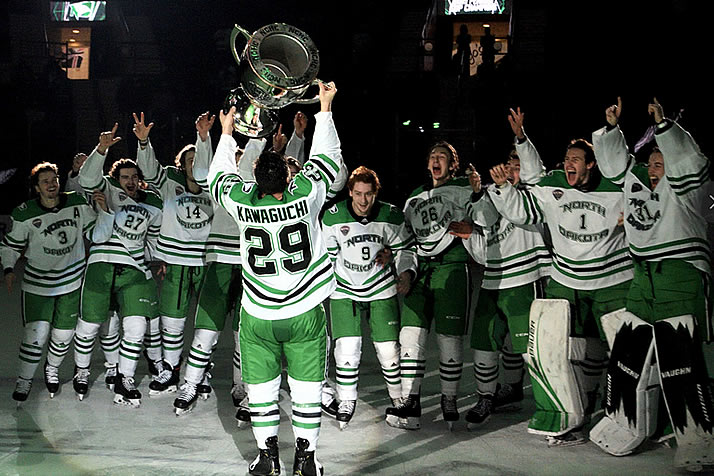 Regular-season champions have been crowned in four of the six NCAA Division I men’s hockey conferences, with Hockey East and the NCHC yet to be decided entering the final weekend. UMass holds a five-point lead over second-place Northeastern and Merrimack in Hockey East, while two-time defending NCHC champion North Dakota leads Denver by four points.

If UND can secure its third straight Penrose Cup, it would give college hockey four repeat conference champions for the first time since 2015-16, when five teams did it: Minnesota, Minnesota State (co-champ), North Dakota, Quinnipiac, and Robert Morris.

While Hockey East and the NCHC are settling their regular-season races this weekend, Atlantic Hockey, the Big Ten, CCHC and ECAC all will begin the first round of their respective conference tournaments. Visit the links below for brackets and additional information:

Minnesota State senior G Dryden McKay enters the CCHA Mason Cup Playoffs with 31 wins on the year, tied for the sixth-best single-season mark in NCAA history. Michigan’s Marty Turco (1995-96) and Minnesota’s Robb Stauber (1987-88) share the record with 34 … When Brad Malone (North Dakota, 2007-11) made his season debut for the Edmonton Oilers on Tuesday, he became the 24th UND alum to play in the NHL in 2021-22, the most of any program in college hockey. UND, Minnesota (23), Boston College (20) and Boston University (20) all boast 20-plus NHLers this season … Sportsnet’s Elliotte Friedman had this note in his latest 32 Thoughts column Wednesday: T.J. Tynan is averaging 1.62 points per game for AHL Ontario – 11 goals and 52 assists in 39 games. That would be the best since 2006-07, when three players beat that: Brandon Bochenski (1.88), Jason Krog (1.82) and Darren Haydar (1.67). All four players listed by Friedman are college hockey products: Tynan played at Notre Dame and Bochenski at North Dakota, while Krog and Haydar were teammates at New Hampshire.