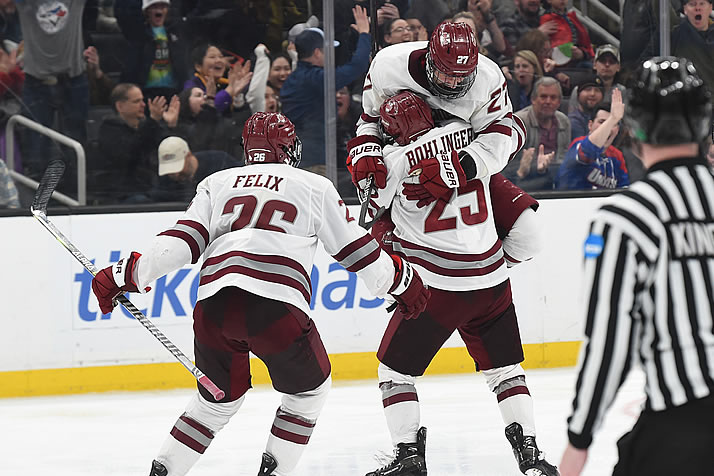 Sixteen teams continue their pursuit of a Frozen Four berth this week when the 2022 NCAA Men’s Hockey Tournament gets underway at regional sites in Albany, N.Y., Allentown, Pa., Worcester, Mass., and Loveland, Colorado. The puck drops Thursday with a quartet of regional matchups.

Each regional champion will advance to the NCAA Frozen Four in Boston (April 7-9).

All 15 tournament matchups can be seen on the ESPN network of channels, and Canadian viewers can watch the entire tournament online via TSN.ca and the TSN mobile app.

The Champ Is Here:

Hockey East playoff champion UMass is back in the NCAA Tournament after claiming the first national title in program history in 2021. Head coach Greg Carvel’s Minutemen are bidding to become college hockey’s second straight repeat champ after Minnesota Duluth did it in 2018 and 2019 (the 2020 tournament was canceled due to COVID-19). The last time two different schools won back-to-back repeat titles was in the early 2000s, when Minnesota (2002-03) and Denver (2004-05) did it.

Michigan and Minnesota are both making their 39th appearance in the NCAA Tournament, tops among NCAA Division I programs:

Home is Where the Heart Is:

Top-ranked Minnesota State enters the national tournament on a 15-game winning streak. The Mavericks also boast a 9-2-0 record against the rest of the tournament field, the best such record among the 16 teams:

Minnesota Duluth has the most familiarity with the tournament field, having played 25 of its 40 games this season against the other tourney qualifiers.

The Best of the Best:

All 10 of this year’s Hobey Baker Memorial Award finalists are competing in the NCAA Tournament, the second straight year and third overall (1989) the entire Hobey field has qualified for the national tournament.