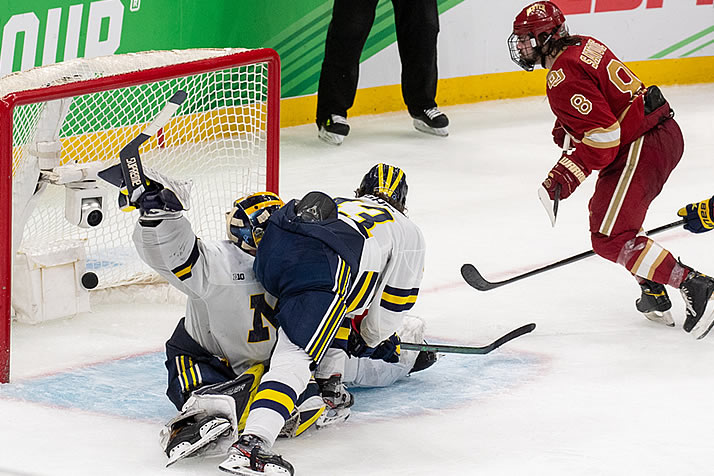 They took divergent paths during the NCAA Frozen Four semifinals to get there, but Denver and Minnesota State have advanced to Saturday’s national championship game at TD Garden in Boston.

Denver is chasing its ninth national championship, which would equal Michigan for the most in Division I men’s hockey. The Mavericks, meanwhile, will play in the championship game for the first time in school history.

Saturday’s national title game is set for 8 p.m. ET on ESPN. It will also be streamed in Canada at TSN.ca and on the TSN app.

Savoie strikes in OT for Denver

Savoie knocked his own rebound past Michigan goaltender Erik Portillo at 14:53 of the extra frame, finishing off a tightly contested matchup and sending the Pioneers to the national title game.

“No words to describe it. Best feeling ever,” said Savoie of his team-leading 23rd – and biggest – goal of the season.

That Savoie was even in a position to deliver the dramatic tally was thanks in part to his netminder Magnus Chrona. The junior from Sweden made two brilliant stops on Michigan dynamos Luke Hughes and Brendan Brisson earlier in the overtime to keep the game deadlocked. The high-powered Wolverines generated just 21 shots on goal on the night – 12 below their season average – but Chrona still needed to provide several Grade A stops throughout.

“I thought we handled them very well. And obviously when mistakes did happen, Magnus was there to shut the door and make a couple really big saves,” said DU Head Coach David Carle. “Obviously the Brisson save in overtime and the Hughes save in overtime were exceptional and kept us in the hockey game and allowed ‘Sav’ to put one in the back of the net for us and send us to the championship game.

Brett Stapley and Cameron Wright also scored for the Pioneers, who reached the 30-win plateau (30-9-1) for the season. Jimmy Lambert and Thomas Bordeleau accounted for the Michigan scoring, while Portillo finished with 30 saves.

Minnesota State, which hasn’t experienced defeat since Jan. 14, kept the train rolling Thursday despite a dazzling 2-on-0 goal by Minnesota’s Matthew Knies nine minutes into the game. The Mavericks responded with five unanswered goals by five different players to advance to the national title game for the first time ever.

It was an incredible 18th consecutive victory for the CCHA champions but, more significantly, marked another step for a Mavericks squad that lost in last year’s national semifinal.

MSU shook off the opening goal by Minnesota’s Matthew Knies, the result of a turnover at the Mavericks’ blue line, and blitzed the Golden Gophers with five straight of their own, all of them coming over the game’s final 33 minutes.

“I thought we had done a pretty good job at possessing the puck and defending. We made a mistake. That happens,” said Hastings. “I thought the guys just flushed it and moved on.”

Moved on, indeed. Benton Maass, Reggie Lutz, Ondrej Pavel, David Silye and Brendan Furry provided the offense, while the Mavericks limited the Gophers to just 16 shots on goal at the other end of the ice.

“I think tonight we didn’t have the start we wanted,” said Lutz. “Everybody kind of bought in, we looked at each other, we didn’t want our season to end tonight. We knew what had to be done.”

• Neither team was penalized in Thursday’s semifinal between Minnesota and Minnesota State, just the fourth time in Frozen Four history that’s happened.

• The NCHC has had at least one team in the national title game in each of the last six seasons.

• A DU victory Saturday would make David Carle, who is 32, the fourth-youngest head coach to win a Division I men’s hockey championship and the youngest since 1963: