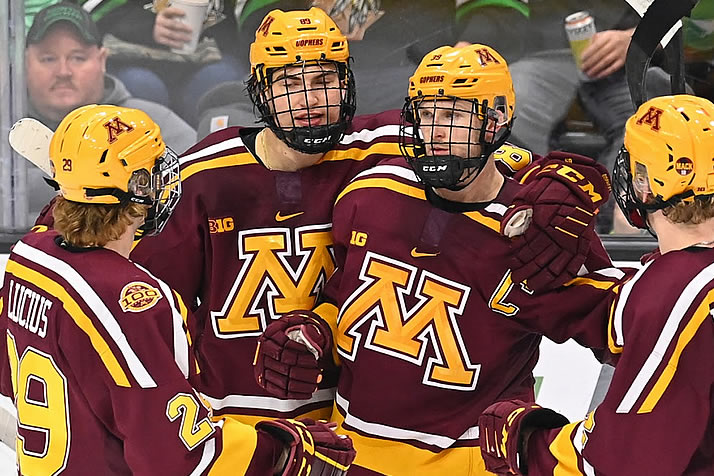 The 2022 Frozen Four features three No. 1 seeds (Denver, Michigan, Minnesota State), a No. 2 seed (Minnesota) and a combined 22 national championships, the most ever in a single Frozen Four field.

Three of those teams – Michigan (9), Denver (8), Minnesota (5) – are responsible for all 22 NCAA titles, while top-ranked Minnesota State is seeking the program’s first national championship. Michigan’s nine national titles are the most of any program in the country, while Denver’s eight are tied for second (with North Dakota).

The four teams have also combined for 67 Frozen Four appearances, tied for the most of any field in history (2014).

The Roads Traveled – How each of the four semifinalists made their way to Boston:

Star-Studded – This year’s Frozen Four field features a whopping 41 NHL draft picks, up from 18 a season ago:


Nine of those 41 picks, including seven from Michigan, were selected in the first round. More than 75 percent of the NHL will be represented in this year’s Frozen Four, with 25 of 32 teams boasting at least one prospect in the field, and 10 teams have multiple prospects competing:

On the Offensive – This year’s Frozen Four field has the makings of an explosive one, with each of the nation’s top four teams in scoring offense having qualified. Denver enters the semifinals averaging a nation’s-best 4.3 goals per game. Minnesota State (4.1) and Michigan (4.0) are right behind, while Minnesota is tied for fourth nationally at 3.6.

Beantown Background – Boston will serve as host of the NCAA Frozen Four for the ninth time in tournament history. Three of this year’s Frozen Four participants have previously captured national championships in Boston: Denver (2004, 1960), Michigan (1998) and Minnesota (1974).

Second-Half Surge – The four Frozen Four squads have rolled up a collective .849 winning percentage since Christmas, having lost just 12 times in a combined 86 games from Dec. 26 on.

Welcome to the Show – When former Boston College captain Marc McLaughlin made his NHL debut with Boston on March 31, he became the 328th college hockey product to play the NHL in 2021-22, a new record. That number has continued to grow over the past week:

48 schools have had an alum in the NHL this season
Colleges producing the most NHLers, 2021-22:
Minnesota, North Dakota – 24
Boston College 22
Boston University, Michigan – 21