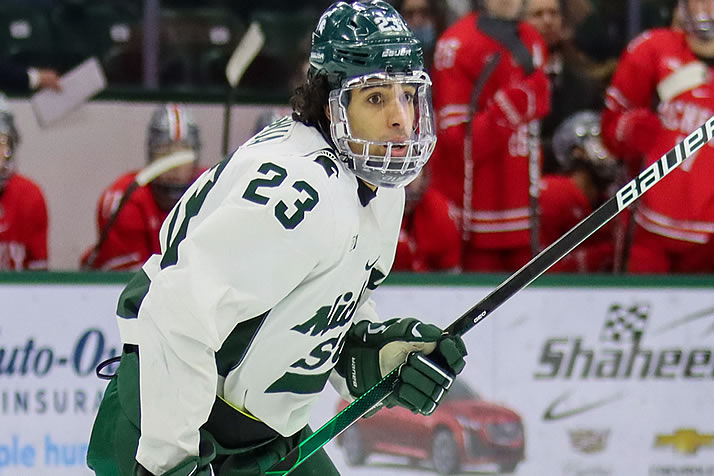 A pair of Big Ten series are among the most compelling matchups in all of college hockey this weekend. The action kicks off tonight in Ann Arbor with a showdown between No. 2 Minnesota and No. 3 Michigan, with the series finale slated for Friday.

Also on Friday, the top two teams in the conference standings – No. 6 Penn State and No. 17/18 Michigan State – will do battle at PSU’s Pegula Arena. The Spartans, riding their first-ever four-game Big Ten winning streak, sit one point ahead of the second place Nittany Lions, who have knocked off the nation’s top-ranked team each of the last two weeks.

Other top-20 matchups this week include:

Give Them a Break:

The nation’s two hottest teams have both run into a scheduling break this week.

Unbeaten Harvard (7-0-0, 6-0-0 EAC), the last team in the country to boast a perfect record, has the week off after nabbing road wins at Union and New Hampshire last weekend. The Crimson return to action next week at Michigan.

RIT (10-2-0, 9-1-0 AH), which has matched Harvard’s current 7-game winning streak, will host the U.S. Under-18 Team in exhibition action on Saturday. The Tigers will resume their regular-season slate next weekend at home versus Princeton.

UMass Lowell is off to a solid 7-4-0 start (4-2-0 HEA) and is ranked No. 13/14 in the latest national polls. A key ingredient for the River Hawks has been the goaltending tandem of junior Henry Welsch (Lakeville, Minn.) and graduate student Gustavs Davis Grigals (Riga, Latvia), who have combined for a nation’s-best .936 team save percentage.

Welsch ranks sixth individually with a .942 mark to go along with his 1.58 GAA and two shutouts. Grigals, who transferred from Alaska prior to the season, also owns a sub-2.00 GAA (1.99) with a .926 save percentage.

The duo will be put to the test this weekend during the River Hawks’ conference series against UConn, which ranks among the top 10 nationally in scoring offense at 3.5 goals per game.

For a ninth consecutive year, college hockey fans in Canada will once again be able to watch NCAA hockey. TSN and College Hockey Inc. announced that TSN will showcase 25 men’s and women’s games throughout November and December, including one game on TSN2 and the remaining 24 streaming on TSN.ca and the TSN App. The rest of the 2022-23 schedule on TSN will be announced at a later date.

Western Michigan freshman F Ryan McAllister (London, Ontario) has exploded out of the gates with 22 points (6G, 16A) in his first 13 collegiate games. He leads the NCHC scoring race by four points and has 11 more points than any other rookie in the league … St. Cloud State graduate F Grant Cruikshank (Delafield, Wis.) is the fastest Husky to 10 goals in a season (12 games) since Ryan Lasch had 10 in the first 11 games of the 2007-08 season … BU freshman F Ryan Greene (Paradise, Newfoundland) had five points (2G, 3A) in Friday’s 7-2 win over UMass, doubling his season totals in all three categories … Canisius senior G Jacob Barczewski (O’Fallon, Mo.) made 28 stops to secure a 3-2 win over AIC on Saturday and became the 35th netminder in Atlantic Hockey history to reach 2,000 career saves … Colorado College junior F Hunter McKown (San Jose, Calif.) has scored all seven of his goals this season while on the power play. Those seven power-play tallies lead the nation.