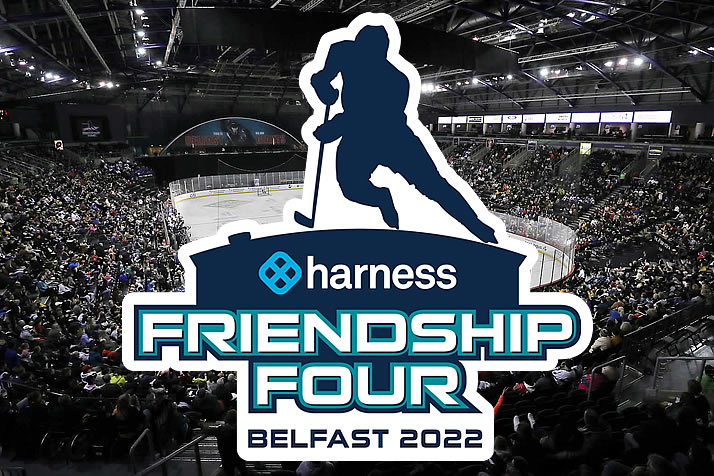 The Friendship Four Tournament returns to Belfast, Northern Ireland, for the first time since 2019.

The Friendship Four Tournament, college hockey’s first and only tournament to take place outside of the United States, returns to Belfast, Northern Ireland, for the first time since 2019. This year’s event features No. 4 Quinnipiac, No. 13/14 UMass Lowell, No. 17 Massachusetts, and Dartmouth. All four games can be seen live on NESN. The winner captures the Belpot Trophy, first awarded to UMass Lowell in 2015.

Additionally, No. 15 Western Michigan will meet No. 18 Northeastern on Friday in the Music City Holiday Classic at Bridgestone Arena, home of the Nashville Predators.

Other notable matchups this week include:

Four players have reached the 20-point mark on the season and all four happen to play in the state of Michigan.

The University of Denver will honor the late Peter McNab (Denver, 1970-73) prior to Friday’s NCHC game against Omaha. The Pioneers will also wear McNab’s No. 15 on the players’ helmets for the remainder of the season.

McNab, who passed away Nov. 6, racked up 170 career points in three collegiate seasons at DU before embarking upon a 13-year NHL career that included stops in Buffalo, Boston, Vancouver and New Jersey. He totaled 813 career NHL points and enjoyed 10 seasons of 20-plus goals. McNab, who most recently served as the TV color analyst for the Colorado Avalanche, was inducted into the U.S. Hockey Hall of Fame in 2021.

Minnesota State Senior Deputy Athletic Director Paul Allan, also the school’s primary communications contact for men’s hockey, announced Tuesday that he will retire on Dec. 16. Allan has guided MSU’s communications department for the past 37 years and was inducted into the College Sports Information Directors of America (CoSIDA) Hall of Fame in 2009.

MSU will recognize Allan for his years of service during a public reception Dec. 12.

College Hockey Inc. would like to extend its heartfelt gratitude to “P.A.” for his immeasurable contributions to college hockey.

“The growth in players is not just to produce, it's to produce in big games. That's where guys have taken that step. Last weekend and this weekend, our best players have been our best players, and that's a great sign.”

Colorado Avalanche D Cale Makar (UMass, 2017-19) collected his 200th NHL point Monday in only his 195th career game, making him the fastest defenseman in NHL history to reach that milestone. The previous record of 207 games had been held by Hockey Hall of Fame inductee Sergei Zubov.

North Dakota is the only team to have scored a power-play goal in every game this season, having tallied with the man advantage in all 13 of its contests to date. UND’s power play leads the NCHC and ranks fifth nationally at 30.2 percent … Northern Michigan junior F Andre Ghantous (Glendale, Calif.) collected 100th career point in Friday’s win over No. 8/10 Minnesota State … Mercyhurst graduate goaltender Tyler Harmon (Ramsey, N.J.) stopped 47 shots in Saturday’s 4-1 win at Holy Cross, the most by an Atlantic Hockey goaltender this season. Harmon has now made 40-plus stops in four of his six appearances for the Lakers.