Paths: Ontario and NCAA hockey
Ontario’s impact is as vast and wide as the province itself 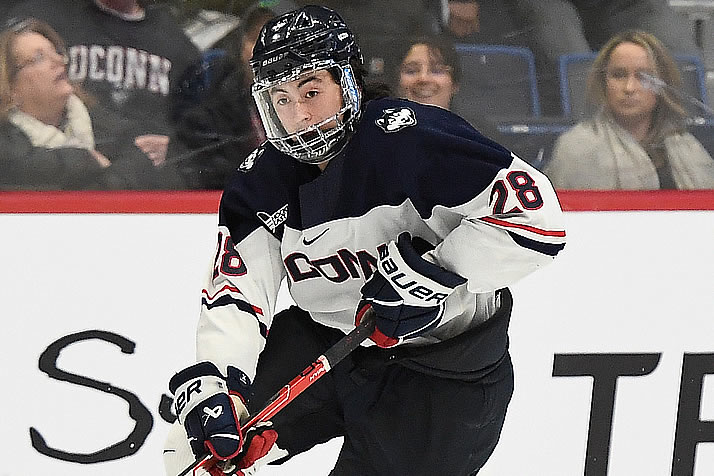 Ontario has long been a fruitful recruiting ground for NCAA Division I men’s hockey. In 2022-23 alone, more collegiate players hail from Ontario (161) than any other province and the sheer number of commitments signifies that trend will continue. That’s hardly surprising given its status as Canada’s most populous province, but Ontario isn’t just churning out quantity; it is also well-established for producing high-end NCAA hockey players.

How Does It Happen?

Is there a common path for Ontarians to best optimize NCAA opportunities? College Hockey Inc. studied the paths of 176 players from Ontario who earned NCAA Division I commitments* from May 14, 2018, through November 15, 2021. *In the cases of players who made multiple commitments, the youngest commitment age was utilized for that player.

Noteworthy themes that emerged from the Ontario study:

While not many players earned their commitment while playing in the NOJHL or GOJHL, 23 percent of the players who earned an NCAA Division I commitment did play in those leagues at one point.

The Data: Hockey Before NCAA

The average commitment age of players from Ontario was 18.5 years. A vast majority of those players – 75 percent of them, to be precise – earned their commitments while playing in NCAA-eligible junior hockey in leagues such as the OJHL and CCHL.

It is important to note that one full year of this study occurred prior to a May 2019 NCAA recruiting rule change. Thus, the average commitment age is certain to rise. Additionally, players awarded a fifth year of NCAA eligibility due to the 2020-21 season being impacted by COVID-19 will also skew the average age older through at least the 2024-25 season.

As evidenced by the numbers below, Ontarians can be playing in a variety of leagues and locales and still have an opportunity to reach NCAA Division I. Of note, approximately 29 percent are not yet playing junior hockey at age 17.

University of Connecticut forward Ryan Tverberg, a native of Richmond Hill, was an NCAA Division I All-America selection as a sophomore last season after pacing the Huskies with 14 goals in 36 games.

Tverberg followed a linear path to college hockey, playing two seasons (2017-19) of AAA hockey in the Greater Toronto Hockey League (GTHL) with the Toronto Jr. Canadiens. After a late-season stint in the OJHL in 2018-19, Tverberg matriculated to that league for a full season in 2019-20 and emerged as a point-per-game player in the OJHL.

“I think building that relationship with the same teammates and coaches, especially on a good team, played a huge role in my decision to stay with one program,” said Tverberg. “Having stayed together for so long helped us build chemistry with one another and growing and learning together as a group factored into my decision.”

Following that 2019-20 season, Tverberg was selected by the Toronto Maple Leafs in the NHL Draft.

“I think these stops ultimately prepared me with a basic hockey sense at a young age and helped me gain a love for the game,” continued Tverberg. “Playing with both of those programs gave me confidence in my abilities and helped me build around my game to develop necessary skills to compete and play NCAA hockey.”

*Tverberg was leading nationally ranked UConn in points and goals at the time of this writing.

Although not a typical or necessary path for NCAA-bound players from Ontario, Adam Fantilli played his U16 year at Kimball Union Academy, a historic prep school in the United States. U.S.-based prep schools have long played a vital role in the path to NCAA hockey for aspiring players in the northeastern United States (however, the schools are open to hockey players from everywhere).

Family considerations factored heavily into the decision for Fantilli, who was able to play with his older brother, Luca, at Kimball Union.

Following his time at Kimball Union, the Nobleton native played two seasons in the USHL – again reuniting with his brother – where he won a Clark Cup title as a rookie and captured All-USHL First Team honors his second year.

Fantilli is now making a massive, immediate impact as a freshman at the University of Michigan, leading the Big Ten in scoring at the time of this writing.

“I think once I got older and matured a little bit, I saw the benefits to going to college. I thought that was the right route for me,” Fantilli told The Michigan Daily earlier this year.

Fantilli is one of the highest-rated prospects for next year’s 2023 NHL Draft.

There has been a common conclusion throughout College Hockey Inc.’s previous “paths” studies: that a player does not need to leave home to be on the radar of NCAA Division I recruiters but rather, playing and playing well are most important.

This certainly holds true for the province of Ontario, as evidenced by the sheer number of Ontarians committing to and playing for NCAA Division I schools. Leagues within the province, such as the OJHL, CCHL and other college-eligible junior hockey leagues, play a vital role in player development for future NCAA Division I players.

For young aspiring hockey players in Ontario, the optimal path to NCAA Division I hockey is the one that begins right in their own backyards.

NOTE: College Hockey Inc. has produced six separate “paths” studies: a comprehensive examination in 2020, a goalie-specific analysis in 2021, in-depth looks at the states of Michigan and Minnesota, a focus on the province of Alberta, and now this study of the province of Ontario. 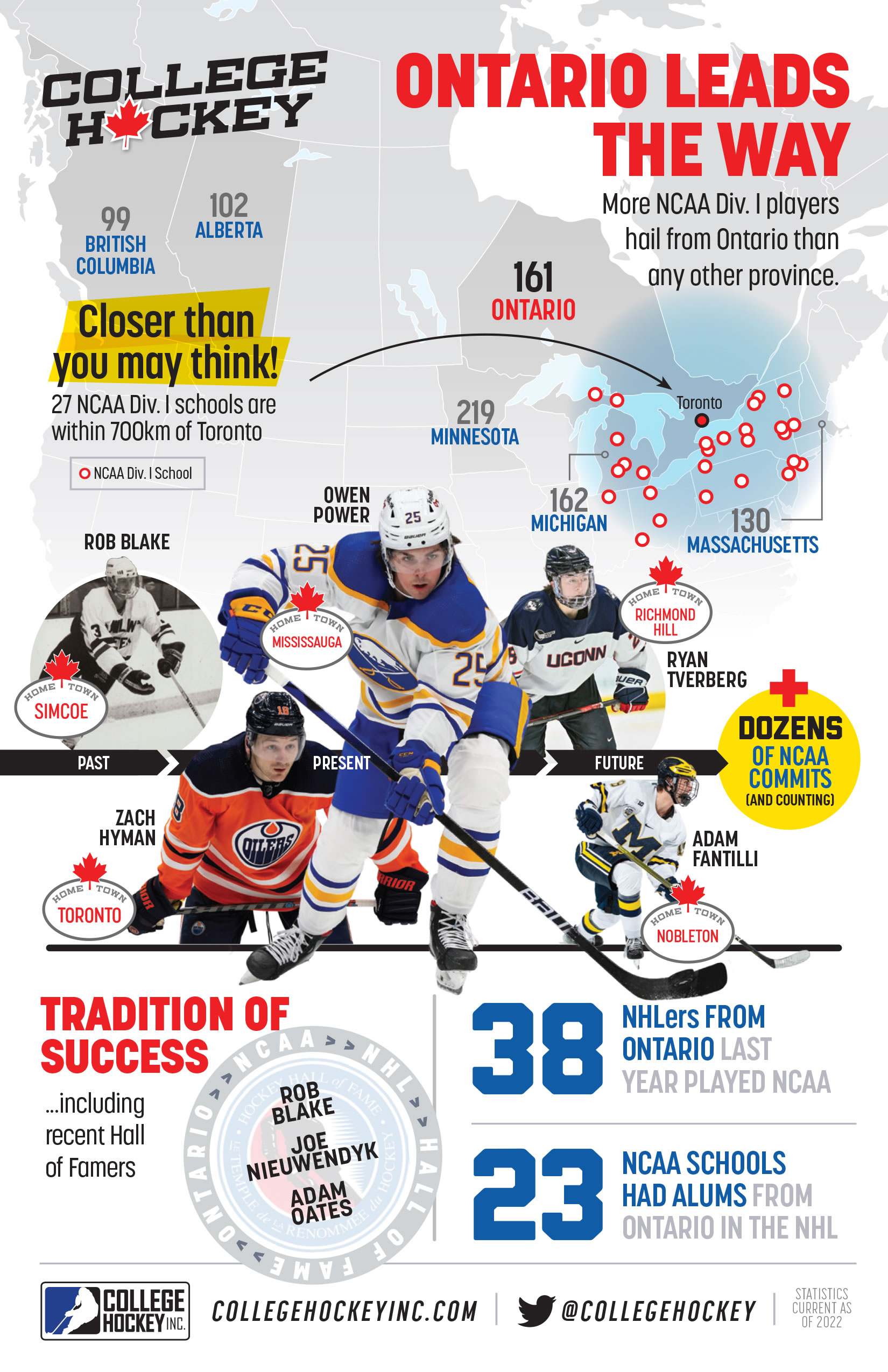