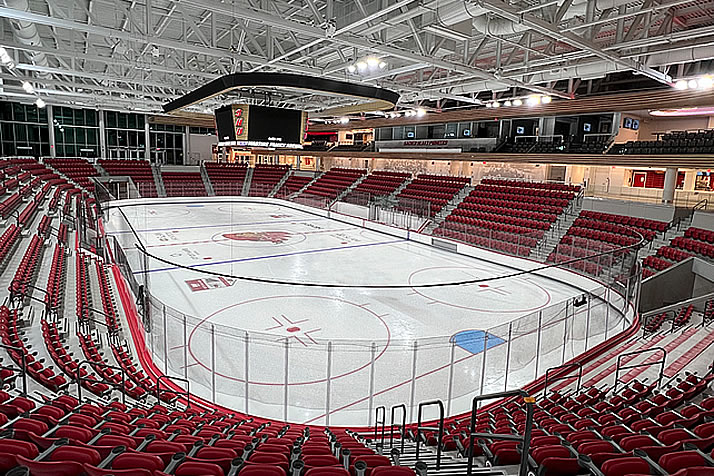 UConn will host a ribbon-cutting ceremony on Thursday at Toscano Family Ice Forum. The first game will be played one night later when the women’s program hosts Merrimack. On Saturday, the women and men will play a doubleheader, with the women taking on Vermont and the men hosting Northeastern.

SHU will debut Martire Family Arena on Saturday when the Pioneers host No. 19/20 Boston College.

College hockey will welcome another new arena next fall, when Augustana makes its Division I men’s hockey debut at Midco Arena in Sioux Falls, S.D.

Elsewhere around the country, this week’s top-20 PairWise matchups include:

Bowling Green sophomore F Austen Swankler (North Huntingdon, Pa.) has surged toward the top of the national scoring leaderboard thanks to a 14-game point streak (10 goals, 27 points) that is the longest active stretch in the country.

The CCHA Forward of the Week, Swankler has put together multi-point performances in each of his last five outings, including a four-point effort (1 goal, 3 assists) in BGSU’s 5-3 win over Lake Superior State on Saturday. He now ranks second nationally in scoring with 34 points in 23 games, four points behind Western Michigan freshman F Ryan McAllister (London, Ontario).

Swankler and the Falcons, who trail CCHA leader Minnesota by one point in the conference standings, host Bemidji State this weekend.

St. Cloud State will retire the No. 9 jersey of Husky great and three-time Stanley Cup champion Matt Cullen (Moorhead, Minn.) in a pre-game ceremony prior to Saturday’s NCHC tilt with Colorado College.

Cullen spent two years (1995-97) at SCSU, leading the Huskies in scoring both seasons. He went on to skate in 1,516 games in the NHL – second all-time among NCAA alumni behind only Hockey Hall of Famer Chris Chelios (1,651) – and captured the Stanley Cup with Carolina (2006) and Pittsburgh (2016, 2017). He also represented the United States at the 2006 Winter Olympics in Turin, Italy.

When Ohio State’s Cam Thiesing (So., Franklin, Tenn.) struck for a short-handed goal early in the second period of Saturday’s 6-0 win over Michigan State, it was the eighth SHG in 22 games this season for the Buckeyes. That total leads the nation and is already just two shy of last year’s national leader, St. Cloud State, which tallied 10 such goals in 37 contests.

College Hockey Inc. and TSN announced Wednesday that Canada’s Sports Leader will showcase no fewer than 10 games across its platforms during the month of January, including a Jan. 20 clash between Colorado College and Western Michigan on TSN. The remaining nine games will be streamed on TSN.ca and on the TSN app. Click HERE for TSN’s complete NCAA hockey broadcast and streaming schedule.

“As coaches, we get recognition. Players, they get recognition. Never do your athletic trainers and yet they may have to save somebody’s life, and we were very lucky to have Rachel on the bench that night because she saved Eric’s life.”

Did you know? 93% of NCAA Division I men’s hockey players earn their degree!