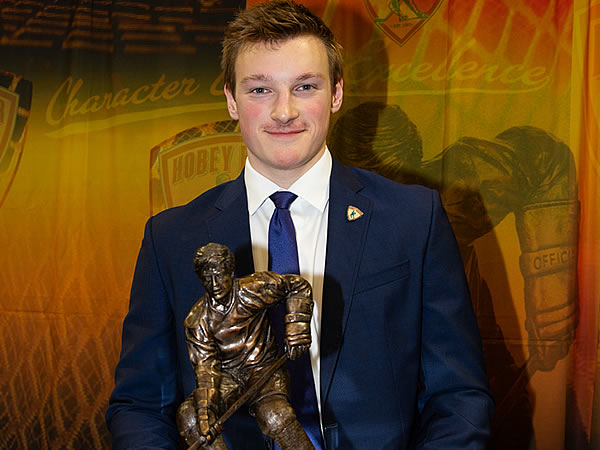 For more than 40 years, the Hobey Baker Memorial Award has celebrated the best in college hockey, being awarded to a player who combines excellence on the ice with strength of character.

In 2021, Wisconsin forward Cole Caufield captured the award, beating out fellow Hobey Hat Trick finalists Dryden McKay of Minnesota State and Shane Pinto of North Dakota. Caufield, a sophomore from Stevens Point, Wis., led the nation in goals (30) and points (52) in just 31 games. He scored 11 more goals than any other player in Division I.

Three finalists are selected from an initial list of ten candidates by the 23-member Selection Committee and an additional round of online fan balloting to determine the Hobey Baker winner. Criteria for the award includes: displaying outstanding skills in all phases of the game, strength of character on and off the ice, sportsmanship and scholastic achievements.

Hobey Baker was the legendary Princeton hockey player known as America's greatest amateur athlete more than 100 years ago. He redefined how the game was played with his coast-to-coast dashes in an era when hockey was contested with seven players and no forward passes. Baker died testing a repaired aircraft at the end of World War I after he had completed his military service.